Built within a former volcanic crater, Sun City is a landmark luxury resort and casino made famous in the golfing world by the twelve-man Million Dollar Challenge held on the Gary Player Country Club course every December. The resort is bordered by the Pilanesberg National Park, which became a National Park in 1979 following the largest game resettlement project in the history of South Africa. The park is now thriving with wildlife including Africa’s famous Big Five - lion, leopard, elephant, buffalo and rhinoceros.

Named after its designer, the Gary Player Country Club is the resort’s centerpiece and has been significantly revamped and strengthened since opening, especially in recent years when a staggering number of back tees have been added and each of the bunkers deepened and enlarged. Built primarily over flat terrain and surrounded by dense bushveld, the course is notorious for its tiny greens, many being clover-shaped with wings to allow tournament pins to be tucked behind bunkers on tiny pieces of green. Coupled with choking Kikuyu grass in the roughs and fringe areas, which makes recovery play both difficult and monotonous, this is one incredibly punishing test.

Most holes play between bunkers from the tee then onto small slippery greens ringed by sand or fronted by ponds. After a relentless start the central holes offer the best chances at birdie, the par five 9th features an island green and is a fun hole if long enough from the tee to be tempted to have a go at the green in two, while the 10th is another reachable three-shot hole with a microscopic green surrounded by thick rough. The finishing holes are also quite good, the 16th is the standout par three while the lengthened 17th had its green pushed into the water, and despite trees and sticky rough along the lake edge detracting a little from the risk-reward possibilities of the tee shot, it is an improvement. A tough dogleg over water to a really tight green, the 18th is a good closer and a pretty appropriate end to such a ruthless challenge.

The Player design itself is not overly strategic or clever but instead relies on its relentlessness and quality grooming to impress. In many ways the excessive difficulty is disappointing, however, as the course is now one of the world’s longest, the greens amongst the world’s smallest and for mere mortals a number of holes have simply become too hard.

Opening in 1993 Sun City’s second course, the Lost City Country Club, was also designed by Gary Player’s company and is considered the resort’s poorer cousin even though many scribes prefer its greater playability. With more width and elevated tees, the course is most significant for a crocodile-carry par three and the adjacent finishing holes, the long par four 9th and reachable par five 18th both heading along a cascading lake with the Flintstone-esque clubhouse as their backdrop.

Though neither course at Sun City is outstanding, for all its tournament history the Gary Player Country Club does warrant a look, especially for those who can afford to stay in the amazing Palace of the Lost City Hotel. 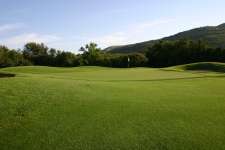 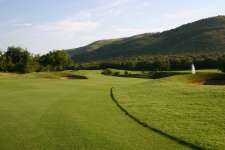 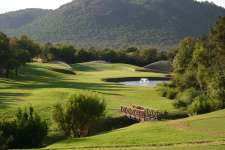 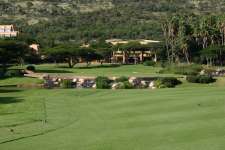