Excess in the golf industry is rife across Korea, particularly modern developments closer to Seoul. Founded in 2010, the Jack Nicklaus Golf Club Korea has, in some ways, become a poster child for the mega-expensive private club model that is so common in this part of the world. Built on reclaimed land near the Incheon airport, the golf course was designed by the Golden Bear himself and cost around $70 Million to create. The decadent clubhouse and training center were almost double that figure again. Not surprisingly, initiation fees are significant here, but members get to enjoy first-class facilities and the prestige associated with joining the only club in Asia to have hostedThe Presidents Cup.

What these high-worth individuals enjoy for their recreation is one of the better maintained and more exclusive golf experiences in the region. The Nicklaus design is somewhat reminiscent of his company’s work throughout North America, with plenty of lively signature type holes, attractive water features and semi-rugged white sand bunkering. The water is an especially prominent feature. A number of longer holes curve around the lakes and three of the par threes play directly across the liquid. Perhaps the most memorable, however, is the drivable 14th, which crosses a creek and resembles the famous 14th at Muirfield Village, except that its green has more undulation. This is also true elsewhere; although some of the bolder putting shapes were softened during a greens redesign program prior to The Presidents Cup, to allow more pin locations during the event.

As with most high-end Nicklaus courses in Asia, this one likely holdsgreat appeal to local golfers as the conditioning is excellent and as much thought went into the rock work, creeks and cart paths as the greens and bunker design. There are few poor holes, plenty of heroic carries and enough modern length and difficulty to ensure that it properly tests the elite professional. Indeed, as the world found out in late 2015, this is an excellent Matchplay venue. 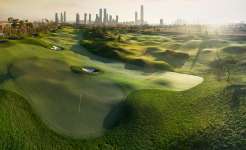 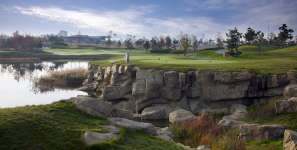