A stunning modern establishment in the hills outside Seoul, the Jade Palace golf course was designed by the Greg Norman Golf Course Design team, headed by project architect Harley Kruse. Expensive and exclusive, members at Jade Palace enjoy opulent clubhouse facilities and one of Korea’s best-kept and most striking course layouts.

As with most Norman courses in this region, the bunkering is a feature with the splashed up traps built with sharp, often fortified, faces. The positioning of the bunkers is generally pretty good, and the course is mostly well constructed with nice rolling fairways, clever green complexes and native grasses effective used to define fairways and separate holes. The routing also works well, as this is steep countryside but the holes rarely feel overly abrupt.

Jade Palace begins with a drivable par four, heavily bunkered on the right and open out to the left for those wanting a gentle two-shot starter. Aside from the 2nd hole, which fights the terrain a little, the fairway bunkering on the 9th and the landing zone shaping on the par five 3rd, the rest of the front nine is mostly enjoyable.

The back nine feels more expansive than the front side, apart from the 11th and 12th fairways, which are adjacent and a little too close. Neither are particularly good holes either, a right side bunker on the 11th eats into the fairway and narrows the landing zone uncomfortably, while the 12th is a shortish par four with a confusing central bunker that reduces options for most hitters. The strong, left-bending 17th is also a touch awkward. Better are par fives at the 10th and 13th, and the gorgeous short 14th hole, while the mid-length 18th heads first across a slight rise and then a pond toward a strangely dull green set beneath a rocky cliff and the imperious Jade Palace clubhouse.

This course displays all the traits of the best GNGCD courses produced by Norman's Australian office during the Bob Harrison years, without quite the shaping sophistication of their very finest tracks. It’s good for South Korea, though, and well worth a game for those able to talk their way through the gates. 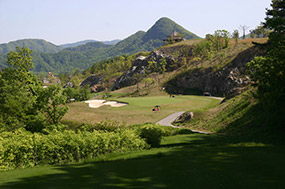 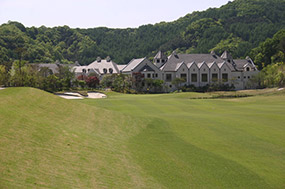 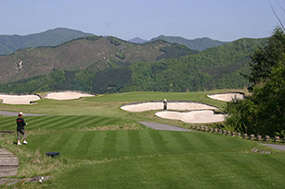 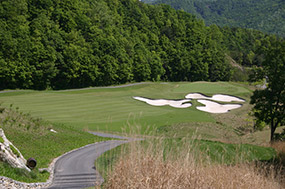