The Lotte Sky Hills Golf Club is a sumptuous 36-hole facility on Jeju Island that was developed by a major Korean retailer, 27 of its holes are dedicated for members use and 9 are open for public play. Robert Trent Jones II’s company designed all 36 holes here, with the Ocean and Hill nines forming the principal 18-hole members course.

While Sky Hills is a good course and a beautiful track to look at, it’s obscenely difficult in places and beyond the capabilities of many who play here. Examples include the left-bending 3rd on the Hill Course, which turns around a lake, has copious bunkers down the right, almost no room to hit from the tee and is sloped sharply toward the water on the second shot. The 600-yard plus 8th on the Hill Nine is another crazy narrow test from the tee, the fairway opening up thereafter, splitting in two and becoming a much more enjoyable test.

On the Ocean Courses, the split-fairway par five 6th is one of those holes that probably seemed a good idea on the computer screen, but doesn’t work in the field because the left side is neither longer nor more difficult to hit for good players but gives an enormous advantage. Most Koreans will play down the right to avoid mishitting into water, but then face a narrowing shot with sand and more water coming right into play.

Although the next is a rather bland uphill slog, the 9th is an appropriately dramatic climax to the round, with all of the glamour and raw appeal one would expect of a closing Trent Jones II hole. Despite being a barely interesting lakeside par five, the hole is enhanced with fountains, waterfalls and a full frontal view of the imposing Sky Hills clubhouse.

Given the general quality of golf in Korea, Sky Hills is a course to admire and a fun place to play for skilled golfers. Given the space and apparent budget here, we do have some misgivings with the Jones Junior design, but this is a track that members, in particular, are sure to enjoy. 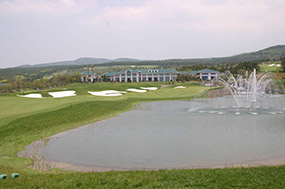 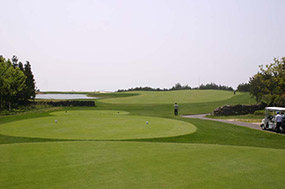 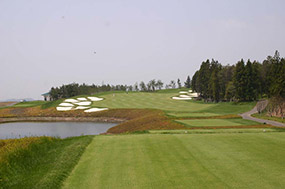 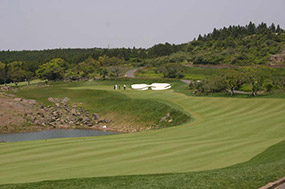