REAL CLUB DE GOLF LAS BRISAS was founded by D. José Banús in 1968 as “Club de Golf Nueva Andalucía.” He was appointed its first President until 1981.

For its design he chose the American, Robert Trent Jones Senior, who was already considered one of the best golf course designers in the world. He had just finished building the golf course at Sotogrande and after Las Brisas, went on to design Los Naranjos and Club de las Aves, afterwards named Valderrama. The course includes numerous water obstacles; there are ten artificial lakes fed by two streams. The greens, the majority of which are raised, are amply protected by bunkers. The results of Robert Trent Jones’s efforts, which we continue to enjoy today, were truly notable and original, creating a difficult and attractive course. He was also original in his choice of Bermuda grass for the fairways and Pencross Bent on the greens unusual species in the Europe of the sixties. The outcome of all this is a round which requires a precise game of golf. As an example of the opinion of great golfers we can quote Paul Azinger (USA), “There is not a single bad hole in Las Brisas. Indeed it is one of the finest courses on which I have been able to play”.

The original design, the Englishman Gerald Huggan was commissioned by D. José Banús to design the landscaping and the course’s arboretum. Gerald Huggan, a great specialist in subtropical plants, had just returned from Kenya where he had designed the Nairobi gardens. Here at Las Brisas we can enjoy his work and imagination, in a place where there are trees representing all the continents of the world: species from Africa like the Cape Chestnut and the Spiny Acacias; the Indian Laurel and the Mysore Ficus from Asia; Chorisia Speciosa from America; the Green Ash from Mexico; and the Blackwood and the Whistling Pine from Australia, together with numerous species of palms and Mediterranean trees which coexist in great harmony, turning our course into a veritable botanic garden.

Sebastián de Miguel, undisputedly the best Spanish player of his time, was chosen as the Las Brisas professional. He represented Spain in the World Cup on twelve separate occasions, being second three times; he has been the Spanish Champion on five occasions, won three Spanish Opens and finished in the top ten at three British Opens. Golf Clubs can be as proud of their sporting history as Las Brisas. In 1970, the year in which it was officially inaugurated together with Puerto Banús, it hosted the International Spanish Open. In 1973 Las Brisas hosted the Amateur Spanish Open and the World Golf Cup, at which the best players of the time competed, with the title being taken by the United States representatives Jack Nicklaus and Johnny Miller, the latter establishing the course record of 65. The Ladies’ record of 67 is held by the Spaniard Cristina Marsans.

During the following ten years our Club was open to the public, serving the needs of tourism in the area and playing host to numerous guests, with 44,000 players visiting our course in 1975. In 1981 the Banús Group sold the course to the businessmen Herman Sauer and Juan Romero who decided to transform the Club into a private Club; to do so, they formed the company Sociedad Campogolf, S.A., which holds the Clubs assets, and 1,320 shares were issued. The Club’s facilities and the golf course were improved. In 1983 the Spanish Open was again held at the Club, leading to a resounding sporting success. The Irishman, Eamon D’Arcy, won the Open with the Spaniard, Manuel Piñero, coming second. Both he and José María Cañizares managed to equal the course record. In 1983, and after a period of consolidation as a private Club, Herman Sauer resigned from the Chair, with elections being called at which D. Antonio Fortuny was voted in as Chairman. During the following years, especially in 1985 and 1991, our Club became the focus of some of the most prestigious national and international competitions like Their Majesties the King and Queens’ International Cup, the Spanish Open, the Nations’ Cup and the World Cup. The Spanish Open held in 1987 was won brilliantly by Nick Faldo, followed by Severiano Ballesteros, only two strokes behind, with the latter beating the course record with 64 strokes in the Pro-Am played the day before the competition.

In 1989 the World Cup was held at Las Brisas for the second time and won by the Australian team, led by Peter Fowler and Wayne Grady, with the Spanish team formed by José María Cañizares and José María Olazabal as runners up. During these years Las Brisas attained excellent sporting results with its teams and representatives, especially within Andalucía. Apart from playing host to the best golfers in the world, numerous personalities and celebrities have visited our Club. In 1970 Prince Rainier, Princess Grace of Monaco and Karim Aga Khan attended the inauguration Gala at which a young Julio Iglesias sang. Liza Minelli and Bing Crosby were amongst the celebrities who have been at Las Brisas. The last Head of State, General Franco, his wife and the then Prime Minister, D. Carlos Arias Navarro, have also walked our fairways.

The relationship between the Spanish Royal Family and our Club is particularly noteworthy: Their Majesties the King and the Queen visited us when they were heirs to the throne. The father of the King, D. Juan de Borbón, the Count of Barcelona, played and visited us on numerous occasions, accepting the position of Honorary President of the Club for life and instituting the annual competition which bears his name. On the 23rd of May 1995 His Majesty the King, D. Juan Carlos I, granted Las Brisas the right to use the Royal prefix in recognition of its brilliant past and promising future. Nowadays, Las Brisas has around 1225 members from thirty different nationalities and its private status allows very few visitors green fees. 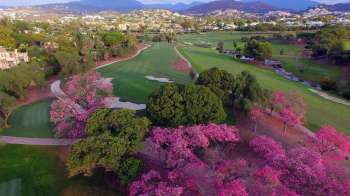