Founded in 1901, and given the Royal charter in 1908, the Real Sociedad Hipica Espanola Club de Campo originally golfed at the Club de Campo Madrid site in the heart of Spain's capital, it's 80-year lease not renewed by a socialist council that decided to make the golf course public access. So members of this very private establishment looked to large plot of land in the dusty hills on Madrid's outskirts and Texan architect Robert von Hagge to build them a 36-hole facility to rival the best in Spain. This was one of the more difficult sites in the region, however, because of its clay base and the fact much of the golf is literally carved from the side of a hill. Von Hagge's shaping work here is quite extravagant, not only adding visual definition to the golf holes, but enabling some of the more severe areas to work better from a golfing perspective.

The South Course opened first in 1997 and is probably a touch less severe than the North Course, especially the North front nine which gets very steep. The South's hill holes, such as the 2nd and 16th, are actually quite decent whereas the big plunging or steeply elevated holes on the North work less well and some of the water tests are beyond the capabilities of most members here. The shapely bunkering and dramatic ground movement obviously appeals as this is a very successful golf development. A close look at the mounding, however, reveals just how difficult this site was and shows the limitations of trying to build good golf on such steep ground. The edges of many fairways are built-up so far that the shapes extend beyond the top of surrounding trees, the soil pushed to such a degree in order to create manageable golf corridors.

While von Hagge and Rick Baril did well working with such unsuitable terrain, this is clearly not as enjoyable as the Forest Course at Emporda or their charming layout at Bogogno in Italy. 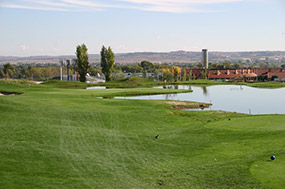