A private members club on the banks of Lake Geneva, the Golf Club de Domaine Imperial was built in the 1980s principally by Pete Dye's son Perry, apparently with some level of involvement apparently from his more famous father. The course does enjoy good moments and is blessed with an air of exclusivity and privilege, but ultimately this is unremarkable golf and not the sort of golf Pete Dye in his prime would have endorsed.

With the exception of the 18th hole none have glimpses of the lake, its the clubhouse that enjoys the prime real estate at Domaine Imperial. The golf land is not without interest, however, with the front nine spread through a dense forest and enjoying most of the interesting terrain. The front has a few fun holes, like the cross-rise 8th, but the golf is punctuated by some obscenely long green to tee walks. The back is more compact, but the ground is duller and the mounding used to separate adjacent fairways at 9, 10, 11, 13 and 17 not particularly well used or naturalistic. Best parts of the run home are the par three 12th, a nice shot into a tricky perched green, the around the pond second half of the 16th and the strong finishing hole. The rest is fairly average.

In terms of the design features, bunkers here tend to be on the more extravagant side, particularly in the fairways where they are often long and deep with step ladders needed to get golfers into the hazard. There are also grassy hollows used on occasion to punish, while the greens are generally tiered and built up to make them more difficult to hit from distance. They aren't poor by any stretch, but like everything at this fabulously sumptuous establishment, they are good without reaching any great heights. This would be a nice club to belong to if you could afford it, but non-members needn't be overly concerned if they can't scrape together the necessary membership fees. 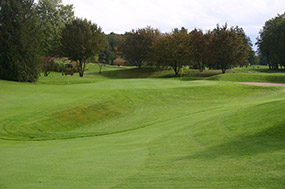 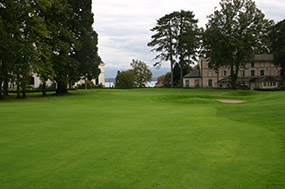 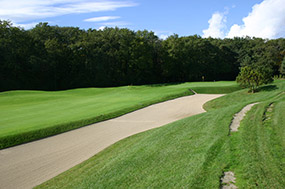