The story of the Engadine Golf Club began in the summer of 1889 when hotel pioneer, Conradin von Flugi, undertook a journey to England with the intention of researching the possibility of constructing a golf course in the Engadine Valley.

The following year a 9-hole course known as the St. Moritz Golf Club, located between today’s railway station and St. Moritz Bad, was first mentioned in the Engadine Year Book of 1890. Thus it was the people of St. Moritz and their guests who first gave a home to golf in Switzerland.

When the game took the Engadine by storm, it came as no surprise that the town of Samedan granted permission to the Hotel Bernina to build an 18-hole golf course in the Champagna plane.

The Director of the Bernina, Angelo Franconi, became the first Honorary Secretary of the newly-founded Engadine Golf Club in 1893, the same summer the Engadine Championships took place for the first time. In the following spring a simple shelter was built in the shape of a chalet, served as the first club house.

The Engadine Golf Club not only has a fascinating story to tell but the fact that the golf club is home to two separate, very different golf courses located a mile apart and run by a single organisation, Golf Engadin St. Moritz, sets it apart from most traditional golf clubs.

The 125-year-old Samedan course is an ancient, links-style parkland layout that runs along the flat valley floor, meandering through streams and characterized by broad fairways flanked by giant larch trees whilst its younger sister course at Zuoz-Madulain, opened in 2003, offers challenging elevation changes, undulating fairways fringed by meadow flowers and receptive greens as it weaves its way along the side of the mountain and between the pine forests.

Situated on some of the highest terrain in the country and within a UNESCO World Heritage site, both Samedan and Zuoz offer stunning views of the towering Alpine mountains beyond and many of the charming villages of the Engadine Valley.

Courtesy of the golf club. 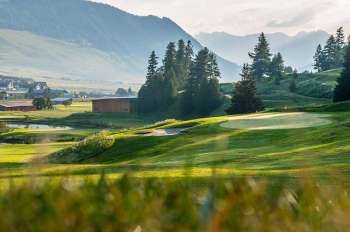