Designed originally by American architect Karl Litten in 1988, the Majlis course at the Emirates Golf Club is the home of the Dubai Desert Classic, which is played early every season and a feature tournament on the European Tour’s calendar.

As a result of the club hosting this important event, they have continually altered and ‘upgraded’ the Majlis to the point that the holes themselves are barely recognizable from the original intent. In some ways, the present layout feels like how a ‘championship’ test created by a committee of Tournament Professionals would be arranged. The holes are as long as seems possible, narrowed and bordered by rough that will ensure only ‘perfect’ shots are rewarded with clean lies, and the greens are mostly small, fast and free of any outrageous contour. They generally lean one way of the other, and are guarded by bunkers that have become so steep in the face as to require, at times, a ladder to enter and exit. Further back, many of the bunkers designed adjacent to the fairways are now well inside the rough lines.

In short, the course has essentially been rearranged to properly reward 'good' shots and punish the 'poor' ones - which many professional golfers regard as the measure of course quality.

So while the tournament test has no doubt improved over the years, from a regular golfer perspective the challenge of Majlis is not strategic or figuring how to play the holes from forward tees, it’s simply about finding narrow fairways with your drive and then trying to hit small greens with your approach shots, and ideally leaving your ball below the hole. The one famous, feature hole on the course remains the highlight of the round, the 8th featuring a stunning city backdrop and an attractive Cape-style tee shot played across the desert and to a fairway that rises to the right.

Other solid holes include the cross-pond par three 7th, the angled par three 15th and the strong par four 14th, which also enjoys a city backdrop off the tee, and bends to the left beyond a bunkered crest.

Elsewhere, the narrow fairways and small greens with their Sun-City like side pinable wings ensure the Majlis course provides a strong test for the game’s best professionals. Golfers who like to play where the Pros play will no doubt enjoy the experience. 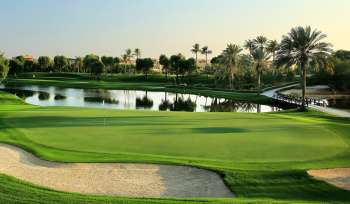 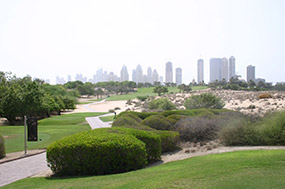 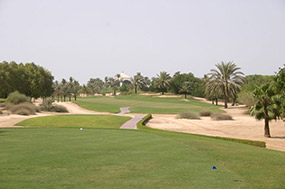