Less than 20 miles south of Crystal Downs, Michigan’s Arcadia Bluffs is a modern daily-fee facility built among huge clifftop dunes alongside the Lake Michigan shoreline. Designed by Warren Henderson, with help from teaching professional Rick Smith, the course is located almost directly across the lake from Wisconsin’s Whistling Straits, and similarly boasts awesome water views and some extreme design features. The big difference between the two layouts being that here the bulging landscape is mostly natural.

Occupying almost 250 acres along the lakefront, Arcadia Bluffs is arranged in two loops around an elevated clubhouse, the opening nine built on steadily leaning ground and the back among larger sandhills that crash more than 200 feet down along the bluffs. Although the terrain is spectacular, in truth much of it is too severe for good golf holes, particularly on the back nine. The 11th, for instance, falls so steeply that 400-yard drives are possible while the 10th, which doesn’t drop as sharply, is even more severe as it heads blind over a dune and then through a wild valley that seems far too tight for such an exposed site. More impressive is the spectacular 12th, routed directly along the shoreline, and the one-shot 13th played toward the water and across a deep ravine. The par threes are also good as are front nine par fives like the uphill 3rd, notable for a series of staggered traps that need to be carried with either your second or third shot, and the falling 5th, which features a massively shaped waste area short of its green.

Given the extreme nature of this site, both the fairways and greens are generously sized, although skinny target areas do make some pin locations quite severe. The outlooks and playing characteristics, however, are first-rate and most who play Arcadia Bluffs are likely to walk away from a round immensely satisfied. 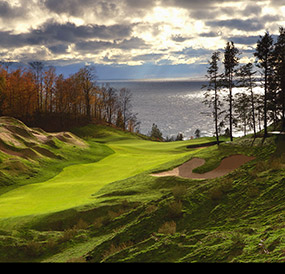