‘Ballyneal is set upon a thousand acres of sand dunes, and our goal has been to take them as we found them and build a course which is a product of the land, rather than forced upon it.’ Tom Doak

Founded by brothers from the small agricultural town of Holyoke in northeastern Colorado, the Ballyneal golf course was designed by architect Tom Doak and built upon some of the finest duneland in world golf. These dunes, almost four hours south of Nebraska’s famous Sand Hills Golf Club, were ready-made golfing fields discovered by the brothers when they were small boys chasing cattle around their parents’ farm. Years later, having established a small hunting club outside of town, they returned to the dunes they had discovered as kids and decided to develop them into a formal golf facility.

Quickly identified as the ideal architect, Doak was invited to visit their property and, not surprisingly, he fell instantly for the land and the opportunity it afforded him to create a course with timeless appeal. Unlike the sweeping dunes of Sand Hills, here the sand structures were more abrupt, yet with the same natural corridors that make the holes appear so untouched. The designer was given extraordinary freedom by his clients on this project, and after two years spent considering various routings he was able to produce for them a golf course of the highest order.

An old-fashioned walking layout that flows beautifully from green to tee, Doak caused minimal disturbance to the native terrain and created the sense that his holes simply emerged from their rugged surrounds. The jagged, blowout-style bunkering is superb, while the putting surfaces feature dizzying internal undulations that are certain to be lots of fun for regular players, and a real eye-opener for the first time visitor. Positioned within a variety of settings, the targets often appear simply as an extension of the rippling fairways and come complete with ridges, tiers, basins, humps and large false fronts. They were designed with fescue green speeds in mind, but have been converted to bentgrass since opening and can now play a little quicker at times.

Although Doak built a number of real gems here, it is the lack of any awkward architecture and the originality of the holes that makes Ballyneal so special. Rarely on such a site does a course exist without black spots or dull areas linking better bits of land, yet here there is nothing even remotely dreary or uninteresting. The course opens with one of the great starting holes in golf, especially from the back tee, where it bends diagonally across an untamed hollow. Consistent with Doak’s strategic principals, in places the fairway is more than 70 yards wide, but those bailing away from the dangerous side are left with an obscured and more difficult approach.

Each subsequent hole has great merit, but likely favorites include the attractively bunkered par three 3rd and the audacious par four 7th, a remarkable hole notorious for a skinny green set within a natural half-pipe. Devilish sand fingers eat into the right portion of this target, creating the need for golfers to use the steeply banked left side to feed their ball toward certain pin positions. The short par five 8th is an equally remarkable piece of design, or more accurately preservation, as the naturally occurring humps and hollows around and within this cleverly angled green are what makes the hole such an original. The massive bunker structure through the center of the bulging fairway is also beautifully located to create an element of doubt and entice players to take a tighter line from the tee.

Other highlights include the extreme putting contours on the 12th green and the glorious par three 15th, played across a spectacularly bunkered ridge and into a deep depression. Emerging from the heaviest dunes on the site, the finishing stretch is also outstanding and comprises a couple of super-tough par fours and a top-class par five that heads sharply uphill and turns through a narrow dune saddle. Here your second shot options are to lay back and leave a long uphill third or attack a pass between the dunes and try to get closer to the green.

Following the success of Sand Hills came the inevitable search for comparable golf land within America’s remote central dunes. Doak’s masterpiece here in Colorado is the only course thus far that has been able to approach the standard set by Coore and Crenshaw farther to the north. Aside from terrific land and terrific design, Ballyneal is full of fun, charismatic golf holes and blessed with an understated charm that fits perfectly with the old-world ambience of what feels an ancient layout. Why the development struggled in its early days, and why any prospective member would look for more in a golf club, remains a mystery. 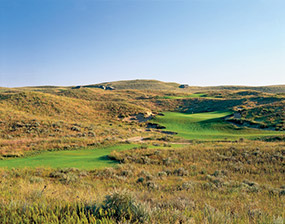 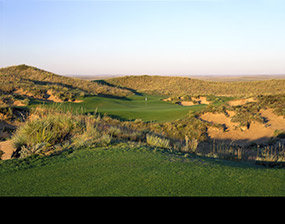 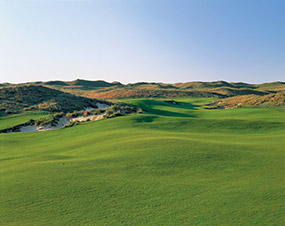