‘In the profession of golf architecture all one can ask for is to be given an extraordinary site and the freedom to work with it. Mike Keiser has afforded both at Bandon Trails.’ Bill Coore

Following the stunning success of his first two coastal courses, Bandon Dunes owner Mike Keiser looked to add a third layout to the resort, this time within a sheltered forest away from the stiff seaside winds. His architects of choice were partners Bill Coore and Ben Crenshaw, whose greatest challenge was to deliver an inland course with enough quality to compliment the existing ocean gems.

Although initial plans had the course entirely set within an elevated woodland, Bill Coore was keen to incorporate some exposed sandhills into his layout and managed to devise an ingenious routing that allowed the golf to move seamlessly through a range of contrasting landforms. Trails begins and ends within the pristine duneland and takes golfers on an absorbing journey across a sandy meadow and up into an undulating forest of spruce, pine and cedar. Located in a range of natural settings, the green sites here are superb and feature some of the pair’s most creative putting contours while the bunkering is said to have been inspired by Australia’s Sandbelt and is deliberately rugged with the traps shaped to blend with the native undergrowth.

Not surprisingly, the starting and closing holes among the dunes are outstanding but so are those carved through the forested areas. A wonderfully conceived and constructed par five on relatively flat ground, the 3rd is really the key to the routing as it is the hole that links the sand dunes to the wooded hills. Amongst the trees, memorable features include the large fractured fairway on the 4th and the green on the gorgeous cross-gully par three 5th, which is almost 50 yards long and noted for a serious depression running across its middle. The neighboring par three 17th is an equally fabulous short hole, the tee shot heading into a beautiful plateau framed by jagged bunker shapes and protected by a cruel false front. Other back nine highlights include the bumpy par five 16th and the gently rising 15th, its green set within a magnificent sandy amphitheatre. The 13th is another fine par four with an awesome target area, this time the approach is played from a slightly hanging lie into an attractive green that is benched into a forested dune and guarded on the right by one of the deepest bunkers on the layout.

There are also two cunning short par fours on the course. The first, the 8th, has a distinct Sandbelt feel as bunkers make the hole narrower the farther you hit your tee shot, yet the pitch is more straightforward the closer to the green you can drive your ball. The other is Trail’s real talking point and probably the most controversial short par four of the modern era. Dropping steeply off the side of a hill, the 14th features a big, wide fairway but a diabolical target set at the end of an oblique ridge that falls sharply on all sides. Missing this tiny green can lead to big numbers and the only way of holding the putting surface is by bouncing your ball along its skinny entrance, all but impossible from the right half of the fairway.

The severity of this green has left many unimpressed, yet a number of America’s celebrated par fours feature brutal pitch shots and this hole is not only beautiful and original but it carries a massive reward for those able to place their drive strategically down the tighter left side. Despite its obvious qualities, the 14th has already polarized opinion across the industry, and it seems to be one of those rare beasts that can not only spoil a round but can also totally shatter a golfer’s perception of the entire course, which is a great shame.

Despite being built away from the coastline and the very element that has made Bandon Dunes famous, Bandon Trails is an exciting layout with a strong and distinctive identity. The course was never going to upstage its elder siblings, but the design team did a brilliant job ensuring that Trails would neither languish in their shadow nor be regarded as the resort’s poorer cousin. Indeed, for many this is the best golf on the property. 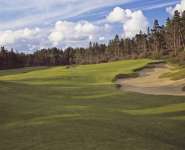 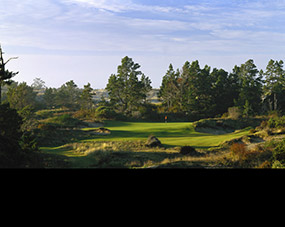