‘Every architect dreams of building among the sand dunes, in the same terrain where golf was conceived in the British Isles. For me and my associates, Pacific Dunes is that dream come true.’ Tom Doak

The opening of Pacific Dunes in 2001 not only launched the international career of ambitious architect Tom Doak, but also firmly established the remote Bandon Dunes Resort as a genuine must-play destination for all serious golfers. Doak had actually first toured the property that would become Bandon Dunes in 1994, and immediately began campaigning owner Mike Keiser to let him design its first course. He lost out to David McLay Kidd, but Keiser later gave him the contract to design the second course, Pacific Dunes, on an adjacent and even more spectacular piece of land.

With the same coastal cliffs as Bandon, as well as huge dunes and natural sandy blowouts, this was one of the finest parcels of virgin golf land anywhere in the United States, and the ideal platform for this self-proclaimed Renaissance man to showcase his design talents. Shunning a conventional out and back routing, Doak instead chose an irregular plan that resembles Ballybunion for the manner in which it loops toward the sea, teasing players by quickly turning inland and then returning for an ocean encore to start the back nine. This arrangement enabled the course to incorporate the best features on the property, though, unusually it left the inward half with three par fives and four par threes, including consecutive short holes at the turn. For Doak, it was never the makeup of par here that mattered, but rather how many world-class holes he could squeeze out of the magnificent terrain.

Despite significant variances in topography, to the designers great credit the entire layout feels as if it was “discovered” rather than designed. There isn’t really an out-of-place hole anywhere on the course. Although some clearly designed themselves, such as the 13th, which is sandwiched between cliffs and a mighty 60-foot sand dune, the rest were carefully crafted to retain as much of the lumpy ground movement and natural wind-blown bunkers as possible. The green sites compliment the surrounding landforms and, where appropriate, feature wild contours and imaginative chipping areas.

The two opening holes are ideal starting points. Neither is within sight of the ocean but their rugged bunkers, cool fairway and green undulations and fascinating recovery shot options introduce players immediately to the charms of links golf. The next is a par five which, like the adjacent 12th and 15th holes, eats up some of the flatter land and connects the duneland to the sea. Doak is on record as admiring Tom Simpson’s use of par fives over dull ground at Ballybunion, and here he similarly built long holes to swallow up such land, the difference being his superior green complexes. The 3rd, in particular, has a wonderful target that sits on a ledge and is only reached after some strategic bunker dodging.

The first to touch the coastline, the 4th is a pin-up par four that hops along sheer cliffs plummeting 100 feet down into the Pacific Ocean. The next turns away from the sea and heads through a sandy valley toward a tiered green that is angled sharply right and full of humps and bumps. It is the first in a terrific set of one-shotters that includes the long 10th, played into a shallow bowl beside the ocean, the 14th with its target perched atop a shaved dune and the mighty downhill Redan at the 17th, which is framed by an immense gorse-covered ridge. The short hole highlight, however, is the all-world 11th, played directly along the cliffs and across native grasses and stunning blow-out bunkers expertly crafted by Doak’s shapers.

Other thrills include an ingeniously contoured green complex at the 7th, the half crowned, half basin-shaped putting surface on the 8th and the wonderfully sporty two-target, high road/low road 9th hole. There are also two excellent short par fours. The 6th is driveable under certain conditions, but its green is tucked beyond a large bunkered ridge on a small plateau and very difficult to hit and hold from the left side of its wide fairway. One of Doak’s favorites, the 16th is a fun hole that bends along a narrowing spine toward a skinny shelf green built at the base of a dune and falling cruelly into a deep hollow.

With an enviable mix of sand, surf and strategic design, Pacific Dunes is a course with a lofty reputation that more than lives up to its billing as a giant of the modern age. The bounces may not always be straight here, the stances are rarely level and the color and texture of the firm fescue fairways and bouncy greens may be off-putting to some, but this is golf in its purest form, and the sort of raw experience that all golfers should embrace. Even if there weren’t other courses at Bandon Dunes, Pacific alone would make the long trip to lonely old Oregon seem worthwhile. 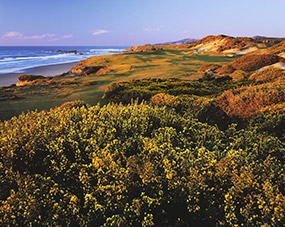 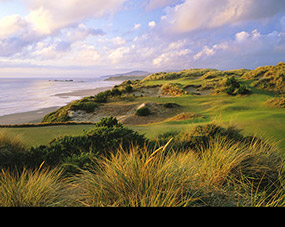 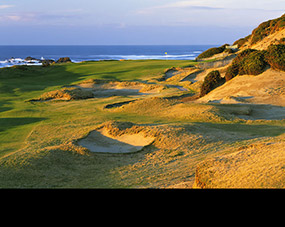