Photo courtesy of the resort

"There is a certain atmosphere about this place that we’ve never seen before.” Ben Crenshaw

From a small corner of his father’s Missouri liquor store, innovator and outdoor entrepreneur Johnny Morris established the Bass Pro Shops business in the early 1970s. After a dozen or so years, the company grew rapidly and today has in excess of 200 retail stores, serving around 200 million customers per year. During its period of expansion, Morris purchased a retreat in the Ozark Mountains, near his Springfield home, which he restored and renamed the Big Cedar Lodge. Jack Nicklaus designed a 9-hole par three course near the Lodge in 1996, called Top of the Rock, and for twenty years that was the extent of the golf on offer for guests of the resort.

Whether buoyed by the ongoing success of his various enterprises, or a genuine love for the game, in recent times Morris has been on somewhat of a golfing binge, adding another short course and three full 18-hole tracks to the Big Cedar portfolio. The expansion began with the 2013 purchase of the nearby Branson Creek development, which included an 18-hole Tom Fazio design, since rebranded as Buffalo Ridge Springs, and an adjacent John Daly layout known as Murder Rock.

By all accounts, the Murder Rock course was disjointed, difficult and poorly routed across violently sloping terrain. Unpopular as well as being unprofitable, the course was acquired along with a vast swathe of wilderness that surrounded it. Ever the trailblazer, Morris decided that rather than redesign Murder Rock he would essentially blow it apart, and create a completely new Coore and Crenshaw layout on its elevated ridges, as well as a Tiger Woods-design down on the valley floor.

In order to elevate the experience and reputation of Big Cedar Golf, Morris needed at least one of his new courses to be world-class. He needed something that could provide recreation for those already familiar with the Ozarks, as well as inspiration for others to make the journey. Despite a difficult piece of upland property, Morris got what he needed from the team of Bill Coore and Ben Crenshaw, with their wonderful Ozarks National design.

Ozarks National essentially tiptoes along a series of scattered ridges, with deep ravines to the side and uninterrupted views from the farthest point of each finger of land. At first glance, this appears as unsuitable a site for great golf as any Coore and Crenshaw have worked on. Thankfully Coore is a patient designer and, after much study of the available landforms, he discovered that some of the ridges were, in fact, broad enough to accommodate golf holes going out in one direction and back again in another. This realization enabled him to see sensible, walkable golf; and to devise one of his most masterful routings.

What makes the Ozarks routing so memorable, is the manner in which Coore and Crenshaw were able to find sensible ways of looping golf from one ridge to another, without having to blast away hillsides as other projects have done. A number of greens have an infinity aspect to them, as the layout reaches the end of one ridgeline, turns around and finds a hole, or a sequence of holes, back to a more generous central plateau. Par threes at the 2nd, 8th and 12th are great examples, of how they were able to use shorter holes to chew up awkward ground and tie one playable area with another. Par fours or fives following any of the 1st, 7th or 11th holes would have been disastrous.

Design wise the infinity greens are beautiful, as are other targets set down on the ground and built with subtle shapes rather than nasty tiers. Across both nines the bunkering is appropriately strategic, or positioned to complete an attractive visual alongside the natural landforms and native grasslands. Among the many standouts are gorgeous short par threes at the 8th and 17th, a risk-reward ravine carry at the 5th and the par five 11th hole, which is Kawana-like given its shapely, internal pine trees. The putting surface on the long par three 12th is also worthy of note, for its size and strong right–to–left slope.

More than individual highlights, however, Ozarks National works because all 18 holes have their own appeal, whilst retaining a cohesive, collective charm. Rare for modern resort golf, this is both a beacon for one-off play, as well as the sort of test serious golfers will yearn to challenge over and over again. Ozarks National isn’t the hardest course at Big Cedar Lodge, nor necessarily the most spectacular. It is, however, the clear architectural standout, and certain to draw a new wave of enthusiasts to this underrated part of the country. 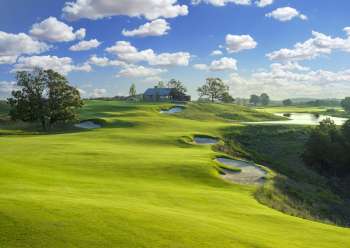 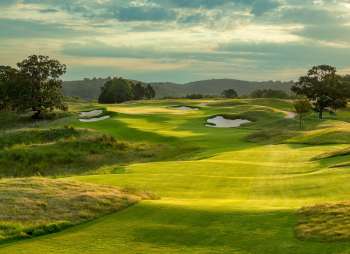 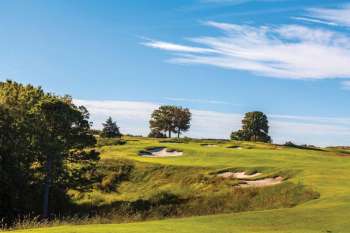