Situated on the outskirts of the quiet Wisconsin village of Kohler, about an hour north of Milwaukee, Blackwolf Run is a 36-hole resort facility set beside the constantly winding Sheboygan River. Named after a prominent chief of the indigenous Winnebago Indians, the property was developed by Herbert V. Kohler and the golf holes designed by his collaborator at Whistling Straits, Pete Dye.

The first eighteen holes at Blackwolf Run were opened in 1988, with the remainder added over the following two summers. The pick of the golf is the River Course, which features nine originals (1-4 and 14-18), and nine that were built in 1990. Arranged in a large twisted loop, the layout follows the snaking river with several greens pressed against its banks and other holes set down in an attractive internal basin. Common to a number of Dye courses, the fairways are quite spacious but the greens are tight and treacherously contoured. Across the property there are plenty of risk/reward type moments as well as other areas where the strategic use of water, trees or artificial mounding complicates otherwise straightforward approaches.

The round starts with a strong par five opening hole, which is built beside the river and bunkered to encourage aggressive golfers to seek that starting birdie. The other three-shot holes are also very interesting, the 8th with its split-tiered fairway and the 11th and 16th both bending dramatically around the river. Worthwhile front nine par fours include the strong 5th, its target benched into a steep hill, and the almost reachable 9th, which offers golfers multiple routes to the green including a short cut through tall trees and directly across an elbow of the river.

Better holes on the back nine include the par four 12th, where a driving pond and central fairway bunker create two avenues into a dangerous waterside green. The 13th is another key hole, if only for the fact that it may be the most difficult par three in America for slicers. Heading up the length of the river, the left side of the hole is blocked by trees forcing you to either play a draw out over the stream or a high lofted shot directly over the towering trees. Also worthy of note is the par four 14th, its slender fairway bending hard right around a lake and its green hidden beyond a pronounced berm for those who hit too far away from the water. Typical of many Dye layouts, the round ends with a strong three, tough four combination, the 17th complicated by a skinny green angled toward the river and the 18th bending around an occasionally flooded waste bunker and featuring a charming green that it shares with the final hole on the Meadow Valleys Course.

Although there are some aesthetic differences between the original holes and those added downstream a few years later, the River Course at Blackwolf Run comes recommended for its design coherency and the number of exciting holes dotted across both nines. This is a long way from the best courses that Pete Dye has built, but for fans of destination golf the fact that it is far less taxing and time-consuming than Whistling Straits has to add to the appeal of this increasingly popular region. 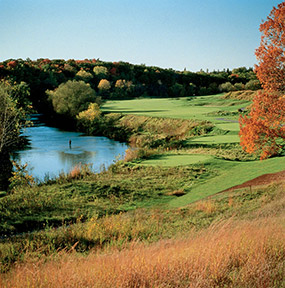 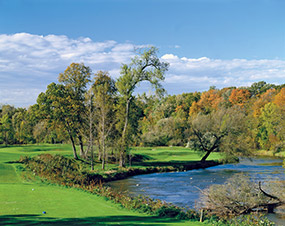