An exclusive male-only enclave, Butler National was one of the earliest collaborations between George Fazio and his nephew Tom Fazio, and remains one of the pair’s most notable creations. The club is located in Oak Brook and was founded by Paul Butler, a local entrepreneur and the man responsible for developing the village into an affluent and thriving Chicago suburb. Butler’s brief to the Fazio’s was to build a course that would be difficult enough to test the world’s best professionals, the designers obliging by creating a track that rates among America’s hardest.

The land provided for the layout was well treed and had some decent elevation change, though nothing overly drastic. The Fazio’s enhanced the site by building a series of water hazards, then fashioned a course that was long from the tips and had fairways lined by roughs and bunkers that are especially severe on stray balls. What really gives Butler National its teeth, however, are its undersized greens, which are generally set at an angle across the fairway, making target areas even smaller and allowing pins to be tucked behind bunkers on tiny wings. The putting surfaces are also contoured and kept very slick, making both approach and recovery play even more challenging.

The round opens with a series of solid holes and a number of tight green sites. Played over a lake to an attractive peninsula green, the par three 5th is the start of a nasty run that includes the long and narrow 6th and the tricky par five 7th, a hole that bends so sharply around a creek and trees that it discourages aggressive tee shots. The short 8th then heads along the rim of the creek while the 9th is an unforgiving four with a small green and a slender fairway pinched by trees.

The back nine is even more demanding. The 11th and 13th are tough par threes with cleverly angled greens, while the rising cross-pond approach into the 10th and the lakeside drive on the 14th are both particularly difficult for tentative players. Hardest of all, however, is the 12th. Converted from a par five into a par four, its long and narrow fairway is lined by trees, bunkers and rough and gently rises toward a three-shot green with a tiny, crowned front entrance. Completing a very thorough examination of your skills are long fours at the 17th and 18th, the final hole forcing golfers to negotiate a huge oak guarding the right side of the fairway by either driving left and carrying more water on the approach or bending their second shot around the limbs.

Despite ageing reasonably well and continuing to provide a stiff test of golf, in recent years Tom Fazio has been involved in a program to refresh and strengthen the holes in the wake of modern advancements in the game. His most significant work was to rebuild the bunkers, digging them deeper and crafting traps with flashed-up sand faces that are visually striking. Although there are a number of holes here that still seem unduly harsh, Butler National was founded as a championship venue and is a club that remains determined to humble the highly skilled golfer. It may no longer serve as a regular tournament host, but with plenty of solid holes and supreme grooming, this is a layout that most readers will thoroughly enjoy playing. 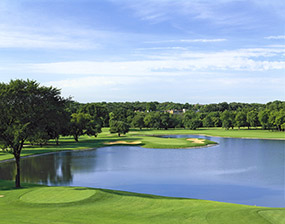 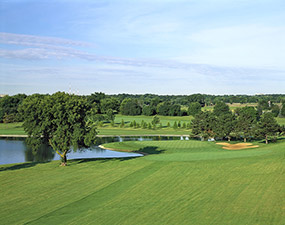