Founded by a group of prominent Clevelanders in 1921, the Canterbury Golf Club is located in the city’s eastern suburbs on a compact property blessed with plenty of natural elevation change as well as a couple of flowing brooks. The course was originally designed by Englishman Herbert Strong, but reshaped shortly after by club professional Jack Way in preparation for the Western Open.

Full of strong, strategic golf holes that bend gently across the tumbling ground, this course is noted for its narrow fairways, punishing bunkers and nasty green sites that are generally angled back-to-front. A regular tournament venue it is early years, unfortunately the club is now landlocked and some of its better holes suffer from a lack of space. The opening hole, for example, heads blind over a central fairway ridge and used to be noted for a daunting long-iron approach played from a hanging lie. Today good players are able to drive down onto the flat area for a much simpler second shot. The small, rounded plateau green at the 8th is another target that would benefit were an additional 30 yards added to the approach. Less affected are fun holes like the short but crowned par five 6th and the long par three 7th, played into a green resting atop a knoll. The finish from the wildly undulating par five 16th is also very strong. Requiring three precise shots for any chance at par, the 16th is followed by a bruising one-shotter heading into a two-tiered plateau and a deceptively steep uphill finishing four whose green is heavily guarded by sand.

Although many feel that Canterbury lacks modern championship length, it is still a wonderful members course with fine golfing ground, some really solid holes and plenty of variety. Aside from trees, the odd back tee and changes to the bunkering, this charming parkland layout remains very much as Strong and Way first conceived and is a real American sleeper. 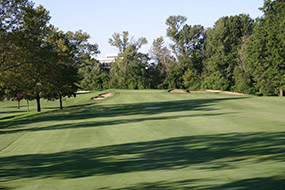 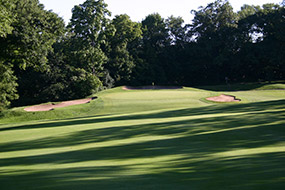 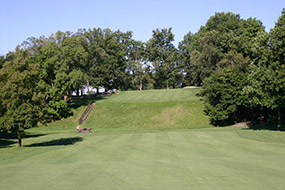