On the evening of October 1, 1994 John & Linda Pfeffer were joined for cocktails by Jamie & Stephania McClennen at their home in Chatham. The conversation quickly turned to golf and Jamie told John about the 85 acres of land across from the Wequassett Inn that his family had owned for years. He was curious, "Could a golf course be built there?" John, having a vast golfing knowledge, responded "Yes, such a tract would probably make a very nice nine-hole course". Jamie considered this and replied, "There might be some contiguous acreage available. Would that permit an 18-hole course?" John's demeanor was brightened and his curiosity peaked. This was the moment of Cape Cod National's conception.

As the following weeks and months rolled by, John began acquiring the abutting land and walked the property with Jamie. Although the property was totally wooded and difficult to walk, they were able to see the enormous potential that this land would offer a golf course designer. By December John had retained the services of the well known New England based architectural firm of Cornish, Silva, & Mungeam with Brian Silva being the lead designer. By the end of March in the following year, 154 acres had been acquired and the new club had been given a name by John, "Cape Cod National Golf Club". 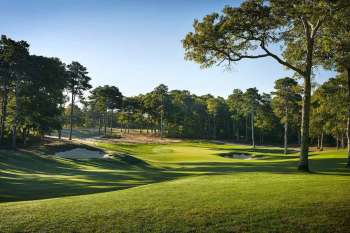