‘I am as proud of our course as I am of the people who have been so instrumental in making the dream come true.’ Jack Vickers

Nestled in the foothills of the Rocky Mountains, Castle Pines is an exclusive gated community located in Douglas County, around 30 minutes south of Denver. The development was founded and financed by oil entrepreneur Jack Vickers, who purchased a large tract of ranching land in the 1970s and employed his long-time friend, Jack Nicklaus, to help him bring world-class golf to the region.

At the heart of the subdivision are two private courses designed by Nicklaus, who also prepared the preliminary routing for a public course that was later finished by Tom Weiskopf. The most significant of the three courses is the Castle Pines Golf Club, which opened in 1981 and is personally controlled and managed by Vickers.

Built more than 6,000 feet above sea level, the course is mostly carved through a forest of ponderosa pines and scrub oak, with a number of the early holes enjoying picturesque views across wildflower meadows and out toward the mountains of the Front Range. Arranged in two loops on either side of an elevated clubhouse, both nines start by plunging downwards and end with holes tracking back up the hill. This is not an easy walking course, as some of the climbs are substantial. The holes are also very long, and although altitude helps your ball fly farther through the air, controlling your distance is vital as the targets are protected by some of Nicklaus’s most severe bunkering. On a handful of greens there are actually areas that collapse into deep traps, making precision on the approach shot even more important.

The most prominent holes here are the heroic water par fives and those with the controversial collection bunkers. The 5th is probably the nastiest example. A long par four playing steadily uphill, the green is shallow and angled steeply forward but most notorious for a concave front section that feeds flag-bound balls down into a difficult bunker. The 6th also features a collection bunker in its front, but sensibly the hole is shorter and the putting surface more generous, especially as many will have a wedge in their hand. Another infamous hole is the 9th, a strong two-shot test played across and then along a creek and featuring a steep uphill approach into tiered green guarded by a yawning frontal trap.

The plunging par four 10th is also very good, this time the approach is played from a gently leaning fairway into a green that is not only quick and full of breaks but set immediately beyond a pond and guarded by cruel back bunkers. Other tricky targets include the 12th green, wedged tightly between a mound and a pond, and the triple-tiered 13th. Aside from a penal and overly-complicated green site on the long par three 16th, the run home from this point is quite solid and offers all level of player the chance to take risks and end with some birdies.

Although structurally Castle Pines has remained largely unaltered, in the years since it opened the layout has been regularly modified and lengthened to retain its championship status. Appealing to low markers in particular, the holes here are attractive and memorable with the conditioning, views and general club atmosphere also weighing heavily in its favor. 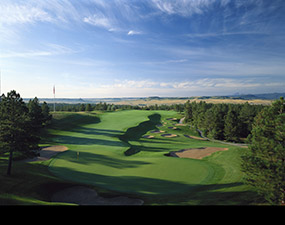