Surrounded by some of Denver’s most expensive real estate, the Cherry Hills Country Club was opened in 1923 and designed by prolific Philadelphia architect William Flynn. Flynn was employed by the club to build them a championship length course, to be laid out across an attractive meadow south of the city. Despite the presence of a couple of winding creeks, much of the land here was flat and rather uninteresting, yet the designer managed to create a strategic layout that, until recently, was unchallenged as the premier course in the state.

Flynn’s supreme achievement at Cherry Hills was an intelligent, balanced routing that combined exciting holes on great land with solid holes across the flatter ground. His use of the creeks and the natural contours that were present on the virgin terrain is also outstanding. Although construction is fairly basic, the green shaping and general use of bunkering is quite sophisticated. The design itself is very subtle, with the firm greens angled to ensure that driving your ball into the correct part of the fairway is essential, particularly on the more undulating holes where out-of-position approach shots are fraught with danger.

Despite its modest length and the fact balls tend to travel farther at Denver altitudes, Cherry Hills has a tough reputation and continues to provide all players with a great test of golf. After a reasonably soft start, the first stern challenge is the pitch into the heavily bunkered 3rd green, followed soon after by another superb pitch shot over massive frontal traps on the par five 5th. In terms of difficulty, the layout steps up a gear from the super-hard par three 8th, protected by a deep trap and a tricky green with plenty of cunning breaks. The 9th then heads uphill along a narrow fairway that offers a huge reward to those able to drive long and straight, as it is crowned to kick anything not flighted precisely down into bogey areas. The downhill, right-to-left 10th is another beautiful par four demanding a cautious approach.

Next outstanding hole is the 14th, which is a brutal two-shotter turning hard left toward a nasty green squeezed between sand and a creek. Marking the start of a fine finishing stretch, it is followed by a tight par three that backs onto this same creek and another strong four cut diagonally by the hazard. Flat and seemingly straightforward, the 17th is then a shortish par five complicated by a low-set island green. The first two strokes here may be simple but the third can be nerve-racking, as the firm putting surface is set immediately beyond a lake that will catch anyone getting too cute with their pitch. Ending the round is a stirring cape-style finishing hole, heading uphill along this same lake and into the most severe green on the course. Hitting away from the water not only leaves an awkward side-hill stance but a horrible angle across a deep bunker and into a target sloping cruelly away.

The measure of Cherry Hills is how solid its unspectacular holes are, and the fact that the continued tweaking and lengthening of the course has failed to adversely affect the character of the original Flynn design. Best remembered for Arnold Palmer’s barnstorming final round charge to the 1960 US Open title, this storied course is not an obvious American classic but its subtleties have helped the layout remain relevant and continue to provide golfers with a terrific examination of their game. 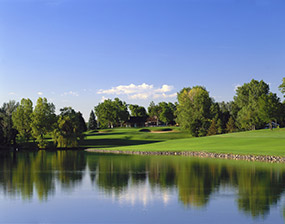