‘Raynor scarcely knew a golf ball from a tennis ball when we first met, and although he never became much of an expert in playing golf, yet the facility with which he absorbed the feeling which animates old and enthusiastic golfers to the manner born was truly amazing, eventually qualifying him to discriminate between a really fine hole and an indifferent one.’ Charles Blair Macdonald

One of the early pioneers of American golf, Charles Blair Macdonald was introduced to the game while studying in Scotland during the 1870s and upon his return to Illinois became a key figure in helping establish golf as a mainstream sport. Aside from driving the development of the USGA he also won the inaugural US Amateur Championship and designed the landmark National Golf Links on Long Island, America’s first truly world-class design. His first significant contribution to the sport, however, was as the founder of the historic Chicago Golf Club.

Established in 1892, the club’s first track was a basic nine-holer designed by Macdonald on a small farm west of the city. In the Spring of 1893 he extended it to 18-holes, making it the first full-length course anywhere in the United States. The club’s popularity grew so rapidly that the following year members purchased a 200-acre field near Wheaton, where Macdonald could build them a more substantial layout. His new course measured 6,200 yards and opened in 1895. Despite the success of the Wheaton move, Macdonald left Chicago for New York and began formulating plans to build what he regarded as the ideal golf course.

The creation of the National Golf Links elevated architectural standards in America, and Macdonald was soon asked to advise on improvements to his old Chicago layout. Rather than handle the work himself, he sent his associate Seth Raynor. Apparently armed with specific instructions from his mentor, Raynor rebuilt the course in 1922-23, retaining a couple of Macdonald holes and adding prototypes of others like the Redan, Road, Biarritz and Eden. He also designed several excellent originals, using the same strategic design principals as these famous templates. The greens, in particular, are memorable for their sheer size as well as for the steep internal contours and deep trench-like bunkers that line the sides of the oft-raised putting surfaces.

There are almost too many outstanding holes here to review individually, but a couple of key stretches do standout. The start is superb; the uphill opener a refined remnant of the 1895 course with its slanting fairway, strategic bunkering and huge green site leading to many a soft opening bogey. The 2nd is then a bruising uphill par four with a nasty ‘Road Hole’ green complex while both the Biarritz 3rd and the innocuous looking, but deadly, par five 4th also feature frightening target areas. As does the par three 7th, one of the world’s finest Redan’s. Completing a stunning loop of holes, the 8th bends slightly to the left but is ingeniously shaped to encourage play out to a wide right field, leaving an approach from a falling stance and into a green angled across the golfer. Equally intimidating is the second shot into the Redan-like 11th green as well as the elevated par four 12th, with its unique part-punchbowl green, and the wonderful Eden par three at the 13th. The finishing fours are also brilliant, both the 17th and 18th heading uphill into huge, baffling green shapes that boast plenty of internal movement and surprisingly difficult central pins.

Despite a small and private membership, the development of the Chicago Golf Club is inextricably linked to the sport’s increasing popularity in the United States during its formative years. Thankfully the course has remained remarkably well preserved through the decades, a handful of well-concealed back tees about the only noticeable change since the 1920s. There are bound to be some that find these holes too short for modern play, but for purists, historians, architecture buffs or simply passionate golf people, Chicago GC is the absolute embodiment of a great day’s golf. 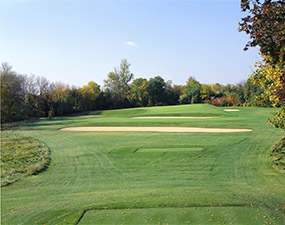