Located on the eastern side of the Sierra Nevada Mountains, in the Lake Tahoe district of Western Nevada, Clear Creek Tahoe features a Bill Coore and Ben Crenshaw designed golf course as the centerpiece of its 1,500-acre residential development.

The golf course at Clear Creek opened in 2009, after the design team had been given first choice of the stunning mountainside property for their layout. Bill Coore chose a spectacular tract of land upon which to build his holes, and routed two nines in counterclockwise loops away from a central clubhouse.

While the site takes advantage of a number of mountain peaks and views, this was not an easy project for Coore given his preference for working with the land and the fact that, on this occasion, the land was fairly steep. As is his great skill, the designer not only managed to build a number of superb holes into the layout, he also worked internal undulation into holes in such a manner as to keep the routing intimate and, if keen, walkable. The use of false fronts on greens and humps and mounds in the surrounds to create shape and interest, or to mask steep gradients, is especially effective.

Cut through striking stands of Ponderosa pine trees, Clear Creek Tahoe is noted for some dramatic shifts in elevation, such as at the huge plunging par five 3rd hole, which drops more than 200 feet from tee to green, as well as for some softer, more subtle gems like the drop-kick par three 17th across a scrubby waste area. The use of distant peaks as backdrops is also a special feature of the layout, the final third of the long and wonderful par five 13th hole is a case in point, its small, strategic green complicated by a wonderful central bunker and framed by one of the mighty Sierra Nevada mountains.

Mountain design has never seemed one of Coore and Crenshaw’s strong points, given their lie of the land approach to design and the fact that courses with enormous elevation changes are rarely walkable. Clear Creek Tahoe is far from the finest golf course in their portfolio, but does continue a rich tradition of Coore and Crenshaw design, and that is to be of such quality that it’s hard to imagine anybody else doing better. 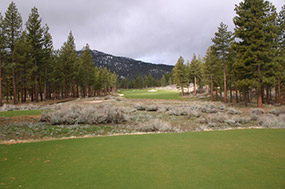