Made famous by the exploits of member Ben Hogan, the Colonial Country Club in Fort Worth was founded by Marvin Leonard, who built the club primarily because he wanted to experiment with bentgrass greens in Texas. Frustrated by the coarse Bermuda greens at his home club, Leonard purchased a flat tract of land beside the Trinity River and asked both John Bredemus and Perry Maxwell to advise him on the layout. Each was apparently asked to submit a number of alternate plans with Leonard using his favorite elements from the various proposals to create his course.

The collated layout is classically understated and remains challenging despite being cramped and of only modest length. Driving is demanding as the fairways are tightly lined by trees, while the greens are compact, quick and tend to lean sharply forward and feature side areas that reject balls and make the targets feel even smaller. The bunkering is also formidable, the traps generally deep and pressed hard up against the greens.

Interestingly, technology has actually made some of the dogleg holes here more difficult, as they tend to bend quickly and you really need to shape the ball to keep it in play. Hogan once remarked that ‘a straight ball will get you in more trouble at Colonial than any course I know’ and modern professionals used to smashing their drivers dead straight are likely to hit more layback shots from the tee and therefore longer irons into the greens. A classic example is the brutal par four 5th. The final in a trio of holes labeled the ‘Horrible Horseshoe’, it bends around the river through tall timber and unless you can hit a precise power fade you run the risk of either slicing into the hazard or running through the fairway and into a ditch. Strategic doglegs such as the 3rd and 9th are a little more playable, while the closing holes and back nine cross-pond par threes are also very good.

The modern golfer probably expects more than the Colonial Country Club delivers, but Hogan loved this course and it continues to favor the good strikers who can shape the golf ball both ways and consistently hit the small target areas in regulation. 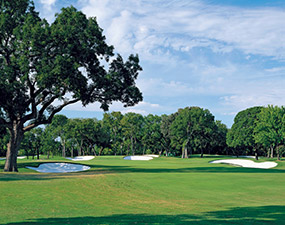