Founded by a group of influential politicians and wealthy businessman, the Congressional Country Club is located in Bethesda, Maryland, about half an hour north-west of the nation’s capital. The club’s original 18-hole course was designed by Devereux Emmett and opened for play in 1924. It was radically overhauled in 1962, however, when Robert Trent Jones extended the facility to 36 holes, splitting the existing course in two and using half the holes for his Blue and Gold courses.

With greater length and difficulty, the Blue Course is the club’s preferred championship test and as a result it has been altered more regularly to keep pace with the modern game. Rees Jones renovated the course in 1990 and again in 2007 when he switched the par three 18th to head the other way across a lake and play as the 10th hole. The terrific par four 17th, with its peninsula green angled toward the water, now acts as the finisher. This change helped create a better conclusion for tournaments, but it destroyed any flow that the back nine might have enjoyed. Already cursed with long walks to the 12th and 18th tee boxes, you now have to walk backwards to get to the 11th tee and then trek behind the 10th green and back up the incline toward the clubhouse after putting out on the 18th.

These issues would be more worrying if they spoilt something truly outstanding, for Congressional, despite its history and status, is a rather uninspiring place to golf. Aside from the new 18th hole, there is little to recommend on a Blue Course dominated by thick rough, symmetrical mounding and some rather unsightly green and bunker shapes. The Gold Course is shorter and less difficult, but also unremarkable save for a clever hog’s-back par four at the 17th, with its green said to have been designed by Donald Ross shortly after the first course opened.

Although both layouts at Congressional will appeal to certain golfers when set up in tournament mode, the truth is there are hundreds of superior courses across the United States. 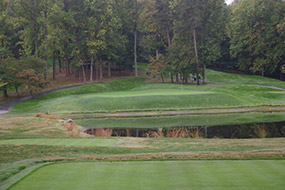 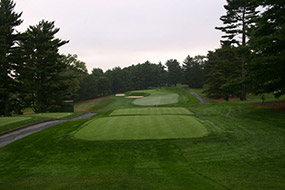