‘I keep going back to Crooked Stick and wondering how I ever came up with it so early in the game. I’m absolutely amazed I ever put it together.’ Pete Dye

A modern golfing heavyweight, Pete Dye was little more than a part-time architect in 1963 when he embarked on an odyssey across the Atlantic to play the classic old links of Scotland. Inspired by what he saw, Dye returned to his home in Indianapolis determined to build a local course that paid homage to these ancient gems. He managed to convince 60 friends and associates to form a golf club and contribute the funds required to build their course. Rather than seeking comparable terrain for his layout, he instead decided to recreate natural golf movement on a flat cornfield north of the city.

With financial backing secured, the enthusiastic but inexperienced designer set about transforming his 200-acre blank canvas into a believable and enjoyable golf test. This involved building a mix of sprawling bunkers and smaller pot traps as well as swales, mounds, undulating fairways and hazards supported by wooden bulkheads. Dye had the back nine finished in 1964 but had exhausted all of his construction funds. It took him a further three years to raise the additional capital required to complete the front nine.

Although the routing hasn’t altered substantially since the 1967 opening, Dye lives on site during the summers and has made regular changes to the course, replanting and recontouring the greens more than once, lengthening holes and continually tinkering with trees, bunkers and mounding. He also converted the front trap on the 16th into a pond, and shifted the 15th tee away from what is now a road, eliminating a dangerous dogleg across private property.

There is tremendous variety to Dye’s routing and design here, players needing to be on their game from the start as holes are visually challenging and continually alter in their orientation. From the tee there is enough width to allow for various routes into greens that are intricately contoured and effectively able to punish the careless or overly ambitious. The back nine is slightly more impressive than the front and features more gradient variations and a more interesting collection of holes. These include the 12th, bending first around diagonal traps and then rising into a superb green site, and the side lake 18th, which is cleverly shaped to benefit the bolder driver. The shortish par five 15th is another really good hole with a remarkable boomerang green wrapped around a deep trap. The par threes are also solid, particularly the long and open 17th, which is bunkered to encourage a right-to-left chasing approach. On the front nine the standout is the 6th, a picture-postcard par three across a pond that is dominated by a gorgeous old oak tree resting beside the green.

Pete Dye is a fascinating character and although he had dabbled in golf design prior to Crooked Stick, this was the first substantial project in his portfolio and its success helped launch what became a generation-defining career. These are no longer his greatest holes, but the course remains dear to his heart and is consistent, tremendous fun to play and continues to provide a solid test for all standard of golfer. 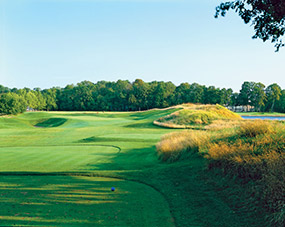