Located close to the western shore of Lake Michigan, the Crystal Downs Country Club was designed by legendary architect Dr Alister MacKenzie, who was introduced to the site in 1927 following his work at Cypress Point. MacKenzie inspected the property with his partner Perry Maxwell, and was delighted by the prospects the wild terrain offered. He routed the course and designed the first nine holes, leaving Maxwell to oversee construction and apparently take on a more significant role during the design of the back nine.

Displaying all of the characteristics that make Maxwell and MacKenzie’s best courses so widely-admired, Crystal Downs has an extraordinary collection of short par fours, a great set of greens and a superb routing that makes full use of the land’s natural attributes. The front nine is more open and arranged across a series of tumbling dunes, while much of the back nine is set within an elevated woodland. The transition between these areas is handled particularly well.

Aside from the imaginatively contoured greens, what makes the Downs so fascinating is that many of its better holes are so audacious they have so far defied duplication. The entire outward half could fall into this category, the fun starting from the elevated 1st tee, which overlooks Crystal Lake and most of the windswept opening stretch. The hole itself falls sharply along a bouncy, crowned fairway toward a cruel left-leaning green at the base of a small dune. Innocuous looking but deceptively steep, the 2nd then tracks back uphill to a target angled forward and at least five feet higher at the back than the front. The 4th is a strategic par four that doglegs around the tree-lined boundary and favors a fade from the tee and a draw into the green.

The next stretch is truly astonishing, starting with a unique par four that heads diagonally across a large bunkered ridge toward a hidden green tucked 350 yards away on the other side. Multiple options exist but the angle of the putting surface and alignment of the split-fairway encourages a dangerous drive as close to the edge of the upper shelf as possible. The 6th and 7th are also multi-option short par fours, the 7th particularly memorable as its green is set in a hollow, shaped like a boomerang and wrapped around a bunkered knoll. Two further world-class gems conclude an absorbing nine. The 8th is one of MacKenzie’s best par fives, its fairway full of heaving undulations and the hole rising into an inhospitable green site placed precariously atop a small ledge. It is followed by a quality uphill par three, which was apparently an afterthought and built because MacKenzie had miscalculated his front nine and only designed eight holes.

Largely arranged by Maxwell, the back nine has a totally different feel as the golf heads away from the open hills and into the more wooded areas. A beautiful par three played across a valley, the 11th introduces the golfers to the trees and features one of the cruellest back-to-front greens anywhere in the Midwest. So acute is the tilt here that some have hit this green in regulation but then taken an unplayable drop to avoid the prospect of putting off the front and back down the fairway. The par four 13th is another with a notorious green, this time angled away to the right and featuring a high front tier, sunken back areas and contours that ensure the sloppy approach is followed by three or more putts. The star of the closing stretch, however, is the 17th, a bewildering short par four that first falls through a narrow dale and then rises into a beautiful target perched atop a distant peak. There are at least half a dozen ways to manoeuvre your ball from the tee to the green, as slopes off a large hill cut the fairway into smaller landing areas, each progressively more difficult to hit but leaving an appropriately easier approach.

Along with Augusta National, Crystal Downs is the most challenging of MacKenzie’s surviving courses, primarily because the holes are so unique and modern putting speeds have made the sharply angled greens so terribly daunting. The thick native roughs are also effective hazards, as are the artistic bunkers which are used both strategically and to enhance the shape of the ground. Despite the timeless quality of its architecture, strangely for a number of decades the course barely registered on national golf ranking lists. Thankfully, a rediscovery was made several years ago that has seen this remarkable layout regain popularity as well as its rightful place among the upper echelon of American golf. 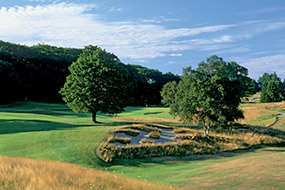 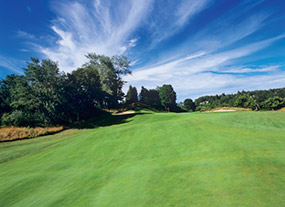 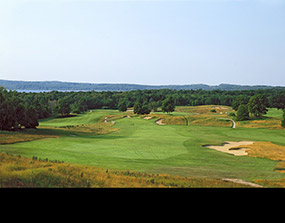 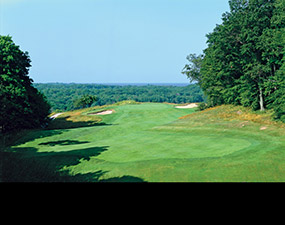