Opening in 2002, the Dallas National Golf Club is a distinctive modern facility built owithin an old rock quarryn rocky ground less than ten miles from downtown Dallas. The steep and heavily wooded property measures almost 400 acres but for years it had sat dormant because zoning issues prevented both mining and urban development. That was until 1999, when a local golfer, John MacDonald, purchased the land and managed to get it rezoned to allow him to develop an exclusive high-end private golf club.

Covered almost entirely in rock, the site had more than 1750 feet of elevation change and essentially consisted of three large plateau areas, each split by deep, densely vegetated canyons and the occasional stream. Architect Tom Fazio was awarded the job of transforming this difficult terrain into an 18-hole layout, and his construction team spent their first twelve months crushing rock and using the debris to shape the holes. He then covered covering the entire site course with sand to allow them to start shaping theprior to grassing the playing corridors holes. Aside from filling in part of a large ravine fronting the 18th green and building up the 14th and 16th fairways, the actual contours on the course are largely as Fazio found them. Some areas are quite steep and things do get cramped from the 12th to the 14th, but otherwise there is a nice flow to the routing and more than enough good holes to keep most members satisfied.

Much of the course is routed atop or along the edge of the plateaus while several holes on the back nine are cut through impressive limestone canyons. The green sites throughout the round are quite impressive, with the contoured targets generally either raised and flanked by traps or set down and open to a running approach. As one would expect from a high-end Fazio course, the turf quality is first-class. The bentgrass greens are pure to putt on, while the fairways, tees and rough areas were sodded with a fine leaf zoysia grass that presents golfers with wonderful playing surfaces.

The better holes tend to be those around the broken terrain, including a couple of par threes on the front nine that either play across or slope gently toward the gullies. On the back nine the standout hole is the dramatic 15th, a long two-shotter that first heads along and then directly across a large ravine. Away from the natural hazards, the 4th and 6th feature nice shots into slightly raised targets while the lengthy par three 17th is an attractive hole played through exposed rock. The most strategic hole on the layout is the mid-length 7th, its open fairway dominated by a bunker down the right that leaves the best angle into a green falling sharply at the back and very tough to hold from the left side.

The landscape at Dallas National is unique, and Fazio’s sensible approach to the design enabled him to extract maximum golfing enjoyment from the harsh environment. With neither ideal terrain nor suitable soil for golf, this was always going to be a difficult assignment but he did a wonderful job creating such a good course on such unsuitable ground. 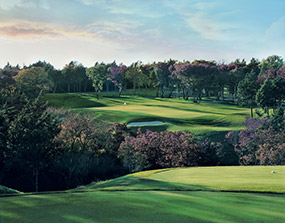 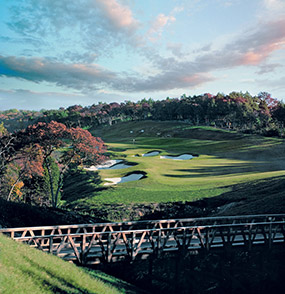