Set in the scenic foothills of the Lower Sonoran Desert, the Desert Forest Golf Club was founded by ambitious real estate entrepreneurs as part of their plans to transform an isolated rural wasteland into a thriving residential hamlet. The course is situated within the town of Carefree, north of Scottsdale, and was designed by Red Lawrence, an East Coast architect who moved to Arizona in 1958 principally to assist his wife’s poor health. Lawrence previously worked with William Flynn, but had designed very few courses himself when given the opportunity to create what would become his most significant piece of work.

Widely regarded as the first quality desert course in America, Desert Forest opened in 1962 and was built as a standalone golf club without country club facilities or any real estate intrusions. The layout was created with a modest budget and minimal earth moving, Lawrence simply carving his playing corridors through the rugged undergrowth.

Characterized by the complete absence of superfluous features, the design itself is quite simple but the challenge presented is one of the toughest in the Scottsdale region. There isn’t a single fairway bunker on the course, nor are there any water hazards or long forced carries, yet what makes the track so demanding are the narrow strips of fairway and the smallish greens, which are often pushed-up and flanked by deep traps. Straight driving is the only recipe for success here, as the fairways play even tighter than they appear thanks to the firm turf and a number of crowned or undulating landing areas that are prone to feeding balls off the short grass and down toward the nasty desert vegetation.

To score well on this course you must be on your game from the opening drive through to the final approach as disaster can strike at any point in the round. The holes posing the greatest threat to par are probably the 5th and 7th, a pair of notorious doglegs that really define the Desert Forest experience. The 5th is the toughest par four on the course, as it bends almost 90 degrees to the left and forces you to either play a lay-up followed by a wood or hit an aggressive drive over the desert and through a pair of saguaro cactus toward a distant fairway. Even more exciting for the long hitter is the 7th, a peculiar hole that doglegs at a right-angle but can be played as a straight par five for those strong enough to carry the waste and flirt with a long diagonal dry wash that separates the final two landing areas. Unfortunately on both of these holes there is only one route to the green for the shorter hitters, and a massive advantage for those able to drive the ball long and straight.

Surrounded now by hundreds of high-end clubs and luxury golf estates, Desert Forest remains a golfing pioneer in Arizona, as it was the course that inspired other developers to view this vast landscape as more than just an arid wasteland. Although the layout may lack the pedigree of America’s best courses, the proliferation of desert golf over the ensuing decades has made it one of the nation’s most important. 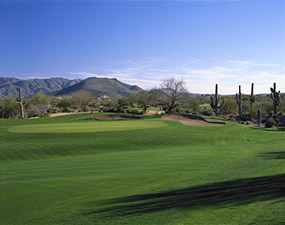