Located in the mountains of Banner Elk, Diamond Creek is a high-end golf course that required a great deal of explosive and earthmoving work to create. Budget was clearly not an issue here, and Tom Fazio was the ideal choice of designer for such an inhospitable yet attractive property, Fazio shaping the mountainous terrain into one of his most eye-catching creations.

The golf holes here are pretty good, but it’s hard to look past the mountain scenery and Fazio deliberately aligned several holes to capture the more impressive outlooks. He also cleverly used colors and textures to highlight the scene and add to the dramatic picture. Off fairway areas are covered in tall fescues, roughs are bluegrass and tees, greens and fairways bent grass. Combined with the same blinding white sand in the bunkers as Augusta National and you have yourself one striking visual picture.

The golf holes are also worth mentioning, the opening stretch is brutally difficult as the 1st features a steeply elevated approach shot usually played with a long iron, the 2nd is a long uphill par three to a small green and the 3rd a hard bending dogleg par four. Like a number of holes here the bunkering on the 3rd is anti-strategic, meaning for the best approach angle you need to drive away from sand but the hole is nonetheless impressive to look at and fun to play.

Other holes of note include the short 6th, with a beautifully built green site, and the monstrous 9th, an excellent two-and-a-half shot hole that rises toward the club’s magnificent clubhouse. On the back nine the pitch into the 10th and the approach into the raised 11th green site are pretty memorable, as is the spectacular par three 17th which is aligned toward a surrounding mountain, and a massive natural waterfall crashing down its slopes.

There is a lot to like about Diamond Creek, especially visually, and this was an enormous engineering task to build as well as they did. Ultimately, however, the lack of great golf holes, strategic interest and the few places where the golf doesn’t quite fit the ledges Fazio created prevent it from reaching loftier heights and are likely to leave the more cerebral golfers a touch frustrated. It’s much better than nearby Grandfather though, which further illustrates how misleading ranking lists can be. 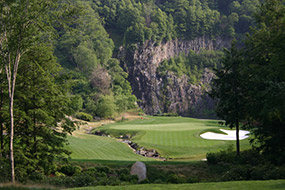 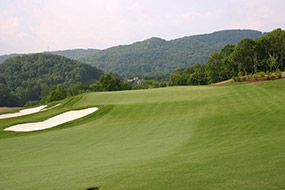