Regarded by good judges as the premier golf course designer of the modern era, Bill Coore was raised in North Carolina and spent much of his formative golfing years studying the work of Golden Age maestro Donald Ross. Like many others, Coore was profoundly affected by the Number 2 Course at Pinehurst, and played it often in his youth. He credits Number 2 as providing the foundation for his understanding of golf course architecture, and it continues to influence his design work today.

After building courses all over America and the world, one can only imagine how excited Coore must have been when the Dormie Club project was conceived. Here, in the same pine-covered sandhills as his beloved Pinehurst, was the opportunity to build something of substance, only a few miles from Ross’s famous resort.

Built during the peak of the Global Financial Crisis, the original development model at Dormie Club was for a private, high-end member-only establishment. That model failed, but thankfully the full 18 holes were constructed anyway and the finished product opened to green fee golfers in 2010, as a pay-for-play public course facility.

Given the locale, the pine forest setting and attractive pine-straw roughs, comparisons between this course and those at Pinehurst seem inevitable. Despite the proximity, however, they are hard to compare as the Dormie site is a lot more dramatic than Pinehurst and the routing puzzle somewhat more complex. Holes are much more heavily treed here, and several are set down beside a couple of large reservoirs. Higher ground between these two bodies of water was central to the routing arrangement, with three holes coming into the area and three holes heading away. Loops in and out of this zone were crucial to enabling Coore to find the best set of individual holes on the property.

As one would expect of a Coore and Crenshaw design, the landing areas at Dormie are generous but the greens are expertly arranged to favor golfers driving nearer to fairway hazards. Many of the greens are set down on the ground, and with a great variety of putting contours. Some lean steeply one way while others, like the excellent short par four 3rd or difficult 18th, feature wild undulations and numerous pinable zones. There is also a great set of par threes, and a bunch of attractively sculpted sandy wastelands.

Perhaps the biggest surprise, for this design team anyway, are the forced carries at Dormie, be they from the tee or through the fairway. The angled drives across water on the 5th and a gnarly waste area on the 15th are both particularly intimidating. As is the use of a Hell’s Half-Acre-style sand hazard on the approach into the par five 17th green. Most every golfer will want to hit past this area on their second shot, but it’s at the base of a steep rise and quite daunting if you haven’t driven a long way down the fairway.

As with many courses by this duo, the Dormie Club is full of excellent individual holes but recommended more for the general ambience, flavor and strategy of the design. It remains the only course Bill Coore has designed in his home state, and adds to the appeal of what was already one of America’s strongest golf regions. Coore developed his passion for golf and golf course design at Pinehurst, and in some ways the Dormie Club is almost like his thank-you gift to the area. 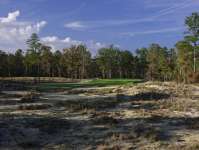 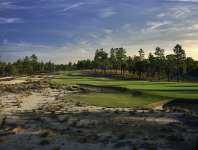