Double Eagle is a small, private club developed by golfing enthusiast John H. McConnell, the founder of a multi-billion dollar steel company established back in the 1950s near the Ohio capital of Columbus. McConnell built his club a little north of the city, on farming grounds he had initially purchased to be used as a fishing retreat for friends and staff. Later, when golf became his primary passion, he approached Ohioan Tom Weiskopf to first inspect the site and then help him convert the land into a quality course.

With more than 300 acres of land at their disposal, Weiskopf and his partner Jay Morrish, set about creating a golfing experience to rival the premier private clubs of the region. Shielded from the outside world by dense woodland, the interior of the property was ideal for golf as it was mostly cleared of trees and had some nice natural ravines and ponds. Leaving the slopes and contours largely as they found them, the designers arranged the course in two loops either side of a clever dual-tee 19th hole, the layout having a spacious feel with trees really only an issue during the mid part of the front nine.

The strength of the Weiskopf/Morrish course is its variety, both in the length and nature of the holes and the use of flashed up bunkers and subtle green shapes. After a solid opener played from an expansive fairway across a gully to a shallow target, the course settles into a soft rhythm with a series of attractive holes that are unlikely to terrorize those thinking clearly and hitting well. Things start to heat up at the long par four 5th, with its daunting approach heading over a gnarly ravine and into a tight green. The reachable par five 6th is a classic gambling hole, the fairway turning through trees toward a dangerous but tempting target set beyond a small ditch. The cross-gully approach into the 7th green is also impressive as is the multi-option 9th hole, noted for its split-level fairway and large spectacle bunkers that prove particularly cruel on those approaching its contoured putting surface from the safer lower fairway.

The back nine features more water and a series of gently bending holes, the best being the Cape-style 15th, which doglegs around a lake toward a small green bunkered to favor those who drive bravely beside the water. There are also a couple of cool heroic holes at the death, both the 17th and 18th offering real prospects of an eagle putt to those taking an aggressive line into the green. The 17th is a driveable par four along a lake with the option of playing dangerously along the hazard or using the two-shot route and bailing to the wide side of the hole. The 18th fairway is then split by a central bunker, which creates distinct landing areas and at least three paths from tee through to the peninsula green.

Weiskopf and Morrish did a first-class job here, creating a pleasant environment for the game and carefully extracting some exciting golf holes out of the subtle landforms. Although Double Eagle isn’t quite up to the standard of the pair’s course at Loch Lomond in Scotland, it nevertheless has plenty of quality and a simple elegance that is hard not to admire. 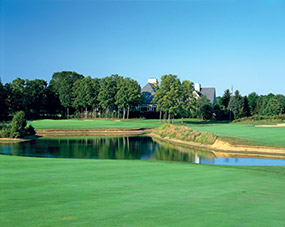 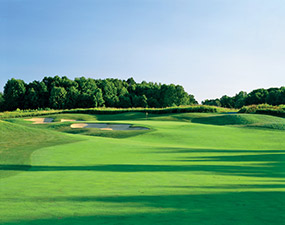