Built on less than 130 acres in the affluent seaside hamlet of East Hampton, the East Hampton Golf Club is a beautifully intimate and intricate challenge created by design maestros Bill Coore and Ben Crenshaw. Noted for its wildly contrasting landforms, the opening seven holes are almost linkslike for the manner in which they tumble softly across a flat, open pasture. The final eleven, by contrast, are set within a dramatically undulating woodland, and have a genuine Pine Valley–type feel.

The club itself was founded by a local farming family, who had laid out a rudimentary nine-hole course for personal use in the 1970s. When an adjacent property became available for sale they expanded their landholdings, created a club and engaged Coore and Crenshaw to create a full 18-hole members course. The design team was apparently restricted to areas that had already been cleared of trees, and did a brilliant job in the circumstances reshaping the older holes to fit seamlessly with those in the newer areas. Aside from the contrast in topography, the most memorable aspect of the course are the scruffy bunkers and small, heavily contoured green sites, which protect par and give a relatively short course its teeth.

For Coore this was an especially personal project. Not only did he design the course whilst on his honeymoon, his beloved dog “Champion” was so fond of playing on the site during construction that when he passed away the designer buried a lock of his fur beneath a bump in the 12th green. Coore is famously hands-on, and his added personal touches and attention to detail are evident across East Hampton.

While the holes through the forest are more striking visually, those on the flatter ground are no less interesting. Aside from the wonderful 2nd, a risk/reward short par four complicated by a small central bunker, other front side highlights include the Principal’s Nose–inspired par four 4th, whose fairway runs along an out-of-bounds fence and is split by central sand traps that force golfers to choose the safer or more aggressive route. Green sites at the 1st, 5th and 7th are also outstanding, as is the very elastic and strategic par five 5th, the sort of hole that cerebral golfers would struggle to tire of.

Within the sandy, scrubby forest, better holes include spectacularly bunkered mid-length par fours at the 12th and 13th, each with a sprawling sand hazard cut into an elevated approach. The fact the bunkers are on the right side of the 12th and the left side of the 13th shows how conscious Coore and Crenshaw were to ensure great balance and variety in their layout. The waste-style bunkering on the 15th and 16th are also gorgeously built and intrinsic to the playing strategy of each hole.

With the exception of someone like Dr. Alister MacKenzie at Crystal Downs, few designers in the history of our game have been able to so successfully manage the transition from one disparate landform to another. From start to finish East Hampton is a real charmer, and the sort of golf course that you long to play over and over again. It doesn’t have the natural beauty or high profile of other Coore and Crenshaw courses, but it does have great character. Given the contrasting landforms, it surely ranks among their most impressive design efforts. 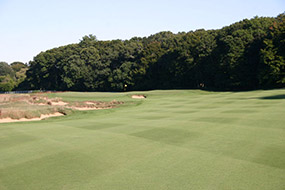 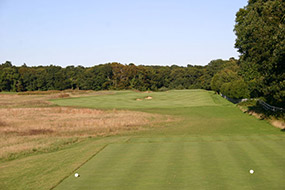 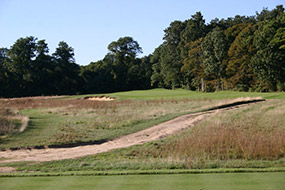