Ekwanok was one of the first quality courses in the United States, the club founded in 1899 and the course first open for play the next year, its holes designed by John Dunn and amateur legend Walter Travis. In subsequent decades the layout has endured much revision, bunker additions and back tees have kept the test relevant but green site changes have had the greatest effect on altering the original design. The current version of the course is quite true to the original routing, although it’s believed only a handful of original Travis greens remain. Geoffrey Cornish moved several, as did some club officials and most recently Bruce Hepner who built a new par three 11th hole.

Set in a rolling valley beneath the Equinox Mountains in Vermont, the setting here is sublime and Travis fell in love with the property and lived out his days in these green mountains. The course has nice topography, most gently moving but with some abrupt ridges and dramatic dips through the far end of the property. After a gentle opening off and back a gentle slope, the course settles into a fabulous rhythm from the short 4th hole, which plays into a small ridge. This target was originally pushed back atop the ridge and was shared with the brilliant 14th green, which remains one of the few originals here. The routing is really sound, consecutive holes rarely in the same direction and a fine blend of driving holes and challenging approach play. The greens are fun and interesting, aside from a couple of bland, tilted targets, with one of the best being the par three 6th, pushed atop an incline and sloping left with a central ridge. The bunkering is also effective, some of the original deep cross bunkers have been replaced by flank traps on either side of the fairway to allow play to proceed through.

Better holes at Ekwanok include the long, tumbling par five 7th, running along the club’s boundary, and the fine blind short par four 8th which is cleverly arranged and contoured to favor those able to take on a second hill by blasting down the more dangerous left side from the tee. On the back nine the standout is another short four, the 14th, which plays from atop and then across a spectacularly bunkered ridge before turning toward a small and dangerously sloping green.

Ekwanok has a lovely feel, playing here is like stepping back in time to a by-gone era where fun and sporty challenge were the most essential ingredients of course design. Few golfers will be disappointed playing here. 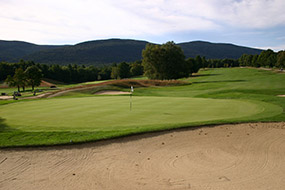 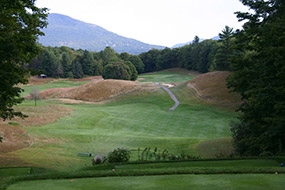 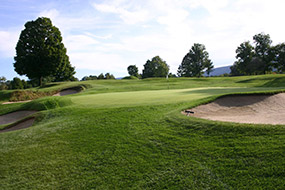 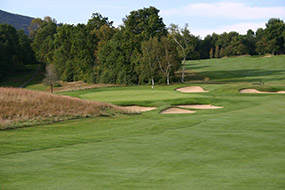