Firekeeper golf course is the newest economic endeavor of the Prairie Band Potawatomi Nation and the hottest new golf property in the Midwest. The course is located in Mayetta, Kansas 15 miles north of Topeka just off Highway 75. Firekeeper is the first signature course of four-time PGA TOUR winner Notah Begay III, the only full-blooded Native American on the tour. He designed Firekeeper in partnership with Jeffrey D. Brauer, ASGCA. Completed in 2010, the course opened in the spring of 2011.

Before work began, the design team went through numerous routings to find the best possible 18-hole layout with minimal disturbance. "Keeping with Potawatomi traditions, we worked above and beyond to retain all of the land's natural elements with minimal disruption," said Prairie Band Potawatomi Nation tribal council chairman Steve Ortiz.

"We put a lot of time in walking the land, which is so important in golf course architecture and particularly in the Native American community," Brauer said. The process started from the moment the potential project was announced. Chairman Ortiz said to Brauer ‘‘you are the only one who really knew our land. Everybody else talked about the best courses they had ever done. You spoke to how you would use our land." "We moved very little earth," Brauer said. "We also used the surrounding land forms as guides when we formed our own shaping, trying to match the rolling hills of Kansas. “Modern architects as a group have gotten away from working with the land," Brauer added. "Renowned course designer Donald Ross couldn't move much earth 100 years ago, and this is just a great opportunity to build an old-fashioned golf course. The course looks great and respects the land and tribal traditions of environmental sensitivity."

The course is a par 72 and has four par fives, four par threes and ten par fours. Firekeeper can play as long as 7,500 yards from the longest tees or as short as 4,500 yards from the forward tees. The course features bent grass tees, fairways, and greens with fescue rough. Holes number one and six share the same huge green and although unique to a Kansas course this blends perfectly with the natural design. The only real hazards that come into play are the tall native prairie grass that helps define the holes but is positioned well off the fairways and an occasional creek that meanders through the heavenly back nine.

The appeal of the Firekeeper is that unlike golf courses that are designed for the purpose of building houses, it is and will remain free of residential bustle. Tees are close to the last green and the routing is easy to follow.  At Firekeeper you hear and see all that nature has to offer. Firekeeper opens with seven holes in the prairie and finishes with eleven holes of natural Kansas creeks, rolling hills, and trees. Firekeeper has no weak holes and you can comfortably hit a driver off most every tee. Potential signature holes include the long five par fourth hole which measures six hundred and twenty five yards and has a huge fairway bunker you must avoid off the tee and a massive mounded green bordered by sand. Hole number nine is a long par four which resembles the eighteenth at Augusta National and will play uphill into a south breeze. It’s usually easy to pick a signature hole but there are many candidates at the Firekeeper. The eighteenth boasts a double fairway and offers a shortcut for the gambler on a fabulous finishing par four. Towner said “we will let the players decide their favorite.” I’m sure it will be the topic of debate over a cold beer in a rocking chair on the patio. The clubhouse has a patio that boasts a fire pit and a western view, the perfect place to watch a Kansas sunset. 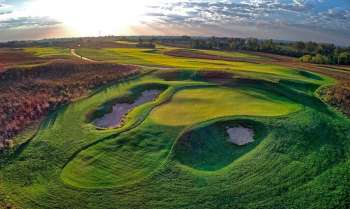