Founded in 1927 as a private corporate club, Firestone’s first course (now the South) was initially designed by Bert Way but overhauled radically by Robert Trent Jones in the 1950s and 60s, and again in 1981 when Jack Nicklaus helped reshape all of the greens. Since then countless back tees have been added, fairways tightened and a number of bunkers added or moved to remain relevant.

Heavily treed, narrow and mostly straightaway, Firestone South is a logical and successful tournament venue with ample space, modern length and great conditioning, but it’s not really much of a golf course as none of the holes are outstanding and the golf gets too repetitive to truly stimulate cerebral players. There are some subtle undulations that are well used, and many of the firm back-to-front green sites are quite good, but ultimately it’s lack of glamour and compelling design that keep it from America’s top shelf.

A hole like the 4th is particularly disappointing, as the landing zone is barely 20 yards wide and heavily angled toward trees cut tight on the left side of the fairway. The 18th is also frightfully tight as is the 1st hole and many others in between. On the positive side, the uphill par three 12th is a solid short hole while both the 7th and 10th are nicely rolling and well thought out longer tests. As is the long 16th, which crosses some steep sideslopes and heads into a tiny green beside a pond.

Firestone South is fun to play for those who enjoy testing themselves on famous championship layouts, but for the rest there are better golfing options in this part of the country. 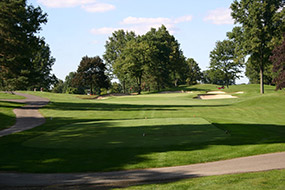