A small, skinny landmass on the eastern edge of the Long Island Sound, Fishers Island is a popular summer retreat for well-to-do New Yorkers, and home to one of America’s most exclusive Golden Age golf courses. The origins of the course date back to 1925, when a corporation was formed to develop the eastern two-thirds of the island into a recreation and housing precinct. The Fishers Island Club was part of this development, and Seth Raynor was hired to plan its golf course. Construction began in the spring of 1925 with the official opening the following summer, only a few months after the designer’s sudden passing.

Occupying a rugged and undulating headland, the Raynor layout is superbly routed in a loop along both the north and south coastlines, as well as a narrow entrance isthmus. As was his modus operandi, Raynor built replica versions of the favored holes of his mentor Charles Blair Macdonald, most blessed with uninterrupted views out toward the Connecticut shoreline. The greens in particular are exceptional, the large targets often set high on plateaus and exposed to the winds, making this a course that can play much longer and more difficult than the scorecard suggests. Confounding your troubles are massive sand traps and tight, bouncy fairways lined by nasty roughs and a series of tidal ponds and marshes.

Although Fishers Island is dotted with fine golf holes, there are two stretches that provide most of the excitement. The first great run starts at the 3rd, a short uphill par four with a narrowing fairway and a steeply raised skyline green. The 4th is then a spectacular two-shotter along the sea, best remembered for a falling approach shot played into a hidden punchbowl target set against the craggy coastline. Concluding an extraordinary seaside stretch is the 5th, a Biarritz-style par three with both its tee and big, square green elevated on either side a yawning chasm.

The next memorable run starts with a series of cruel green sites, the 8th featuring a particularly nasty Road hole-type target angled across play and the 9th with a double plateau green pushed back against the water. Continuing the theme is the short 11th, a brilliant copy of the famous Eden hole at St Andrews. Built with a huge green set atop a knoll, par here is protected by the slope of the putting surface and some of the deepest greenside traps imaginable. The 18th is another great hole, first heading across part of the harbor and then deceptively uphill into a multi-tiered target protected by deep bunkers and a sharp false front. About the only slightly disappointing part of this course is the area immediately preceding this magnificent closer. Both the 15th and 17th are strangely bland holes built without driving hazards or any great interest on the green while in between is a replica of the St Andrews Short hole which, like the Redan 2nd, lacks the natural attributes of Raynor’s best par threes.

Although these holes fail to take the shine off the experience of playing here, they do highlight the shortcomings of using a non-golf designer who never saw the original versions of the holes he copied nor any alternatives that may have been better suited to the land. That said, Raynor did a remarkable job routing this course and the quality of his work, as much as the memorable setting, make it well worthy of its lofty ranking. Despite having several courses under construction when he passed away, Fishers Island was undoubtedly Raynor’s best and it remains his crowning achievement. 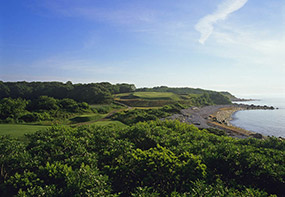 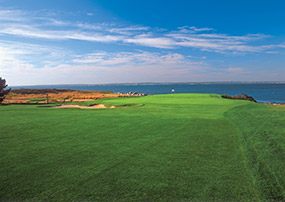