Frustrated by the quality of golf around the Wichita area, businessman Thomas Devlin decided to build his own high-end private golf club and scoured the outskirts of the city in a helicopter looking for prospective sites. Outside Andover he discovered a 640-acre tract of land that had natural ponds and wetlands, established foliage and some decent elevation changes. The picturesque site was ideal, and once acquired he employed architect Tom Fazio to design his golf course.

Despite the holes requiring little earth moving, Flint Hills National cost $18 million to build as some of the wetland areas were expanded and Devlin insisted upon the finest playing surfaces. The tees and fairways were sodded with zoysia grass, the large greens seeded with bentgrass and a bluegrass mix was used for the roughs. Aesthetically the course is first rate. The shaping is also good and the holes structurally quite sound, but those familiar with Fazio’s work may be disappointed to find little new or interesting to digest. There are also some frustrations with the green shaping, as putting contours at times appear contrived to make certain pin locations inaccessible rather than to fit with the strategy of the hole.

The best stretch of golf comes late in the round, from the par four 15th, which is a terrific hole into a wide green that has a central hump helping to direct good shots to either left or right flag locations. The 16th is another strong two-shotter, while the 17th is a pretty par three that heads toward a lake.  The par five 18th then sets up like a cape hole around the lake, but the green is placed beyond water, sand and a large cottonwood tree that blocks the direct route for most golfers and makes it a definite three-shotter. Earlier, the 10th is a pretty par three played directly over murky wetlands while the short par four 6th cleverly has its landing area shaped toward the green to encourage an aggressive play from the tee.

Kept in fantastic condition, exclusive and with all the peripheral trimmings that ranking panels seem to demand, Flint Hills National is a nice golf course and an obvious candidate for the Top 100, though it’s a long way from Fazio’s best work. 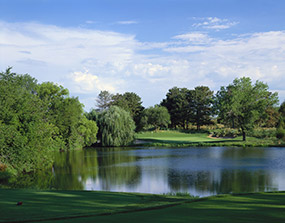