The French Lick Resort in Indiana, is the operator of two superb hotels and diverse golf courses designed by polar opposites Donald Ross and Pete Dye. The Dye Course opened in 2009, and is a modern creation inspired largely, it seems, by the success of his Whistling Straits creation. Here again are wild contours, large dunes, endless pot bunkers, often shaved into the top on unnatural mounds, and some rather extreme design that makes the course borderline unplayable to average golfers.

Dye had such a dramatic landscape here, with glorious panoramic rural views in all direction, that some of the shaping work does seem unnecessarily overdone. This is exciting golf, however, and Dye fans are almost certain to love what he has created at French Lick. Holes like the 1st, 5th, 10th and 18th take a spectacular photograph and are great fun to play provided you have the ability to hit the shots demanded by the architect. Some of the softer shapes and gentler holes work better for average players, but this is not a course that offers much respite for those not on top of their game.

While clearly not to everyone's taste, the Pete Dye course at French Lick Resort is a layout that you will certainly remember.

Pete Dye's latest original design, Golf Digest's 2009 Best New Public winner, established that at age 80 the designer still had fresh ideas, including rumpled chipping swales, country-lane cart paths and volcano bunkers. Measuring just over 8,100 yards from the tips, Pete Dye at French Lick is not the first course over 8,000 yards on the 100 Greatest. That would be Runaway Brook in Massachusetts, now the Pines Course at The International Golf Club. It was 8,040 yards when ranked in 1967. Today it's 8,325 yards. The world's longest is Jade Dragon Snow Mountain in China at 8,415 yards. 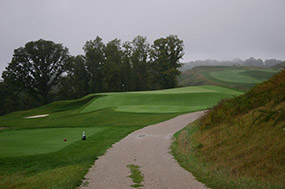 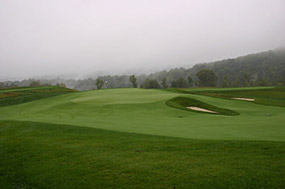 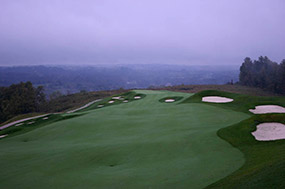