Opening in 1995, Galloway National was developed by banker Vernon Hill, a regular golfer in the Atlantic City region who became so frustrated by slow play on the local courses that he decided to build his own private golf club. With an associate he purchased a magnificent 200-acre tract of pinehills around ten miles north of the city, and employed Tom Fazio to shape the property into a world-class golfing retreat.

Partly sited on the marshy banks of Reeds Bay, the course falls beautifully across the rolling terrain, enjoying stunning views of Atlantic City and out towards the New Jersey shoreline. The routing is a little complicated owing to the fact that the layout had to incorporate three separate parcels of land, and because parts of the coastline were protected. Pushing long, flowing holes against the bay was impossible, so Fazio instead arranged for two early par threes to play directly along the reeds, and for another at the end of the round to head straight out toward the shoreline. The rest of the course is carved through a dense pine forest, the holes enjoying a sense of isolation and blessed with vast expanses of sand and dramatic natural contours.

About the only thing Galloway National lacks is a really strategic short par four. The other two-shot holes are terrific, as are the par fives and the group of distinctive par threes, which get progressively longer throughout the round. The 2nd only requires a short iron, but it crosses the bay and houses a small, crowned green pressed right against the reeds. Heading back the opposite way, the mid-iron 5th also features a carry over the marsh, this time to a larger target protected by a steep false front. The downhill 17th, by contrast, is usually played with a rescue club or fairway wood and its big, sloping green is open and shaped to feed well-struck balls toward seemingly inaccessible pin locations.

The longer holes are also interesting, particularly those on the front nine set amongst the sand and scrub. Demanding approach shots into dangerous greens at the 1st, 3rd and 4th standout, as do the reachable par five 6th and gently rolling two-shot 7th, which turns across a sprawling waste area toward a slightly raised green resting within its sandy surrounds. The outward half ends with a terrific, gambling par five that strong players who drive beyond a dune crest can attack in two.

From the 10th the course changes character a little, as the back nine is longer, harder and a little more unforgiving on golfers striving too hard for pars and birdies. Water comes into play on several holes, while the yawning bunkers and sloping putting surfaces seem to be even more punishing. Aside from the 17th and its Atlantic City outlook, the pick is the uphill par four 15th, which features a spectacular approach over an expansive bunker complex. This craterlike hazard was actually added by Fazio as an afterthought, and helps to complicate an already difficult approach by obscuring a large green site with both a sharp front and a hump through its right side.

With a distinct Pine Valley feel to some of its holes, Galloway National has almost all of the elements required for great golf, the views, sandy carries, sloping lies and bold undulations all helping to give it a genuine sense of real quality. The turf conditioning is also first-rate. Although the internal ponds and occasional long walk between green and tee aren’t ideal, this is a very strong golf course and clearly one of Fazio’s finest designs. 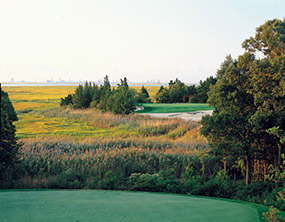 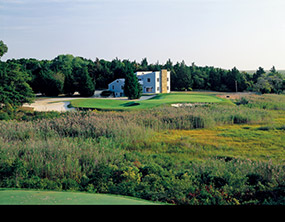 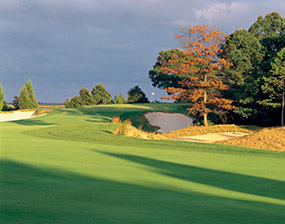