Situated in the shadows of Grandfather Mountain, one of the highest peaks in North Carolina’s Blue Ridge Mountain Range, the Grandfather Golf & Country Club was formed during the 1960s as a private establishment where members could enjoy a range of recreational activities in a scenic and family-friendly environment. From the outset this included golf and Ellis Maples, who had once worked with Donald Ross, was employed to design the club a championship quality layout.

Attractively set in a valley between two large mountain ridges, the Maples course is carved through dense forest with its holes generally isolated from one another. This special feeling of seclusion is further enhanced by a series of natural creeks trickling through the site and across several fairways. Although a number of the earlier crossings are not integral to the strategy of the hole, the water is a particularly well-used hazard on the back nine, most notably on the impressive par four 15th. Here a creek pinches the landing area for those hitting driver from the tee, while the approach is played across a diagonal stream and into a plateau target that falls away on three sides. Other holes of note include the par five 11th, with its large valley fairway and plateau green, the elevated par three 12th, and the strong two-shot 18th, which ends with a green cut into the club’s 35-acre lake. Hitting toward a distant summit, the par five 6th also features a nicely raised target while the Ross-like 17th green is notable for its width, angle and the manner in which bunkers are cut into the sides.

With a number of appealing holes pointing toward the impressive peaks and ridges, this is a lovely setting for golf although the layout itself is clearly a step down in class from the other highly rated courses in the Carolina’s. 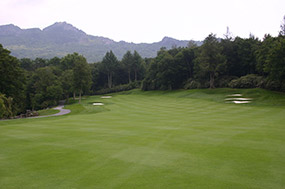 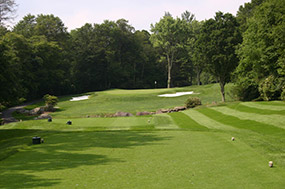 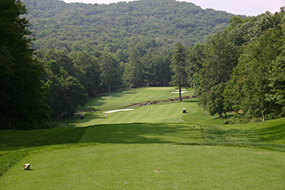