Situated on the secluded South Carolina island of Hilton Head, Harbour Town is significant as the venue where Jack Nicklaus got his taste for course design and where Pete Dye was first thrust to national prominence as an architect of note. The course was actually the third at the Sea Pines resort, its first designed by George Cobb in 1962. Cobb had also prepared plans for Harbour Town but Nicklaus apparently convinced the developer to use Dye instead, offering to also make strategic suggestions of his own. Although Nicklaus made several trips to the island during construction, Dye routed the golf course and was the creative genius behind its unique architecture.

The success of the inaugural Heritage tournament, won by Arnold Palmer, helped establish the Harbour Town brand, as did the spectacular closing holes along the sea and the fact that the course was unlike anything previously seen. Dye made a conscious decision during the project to move away from the popular Robert Trent Jones-style of design in order to develop his own identity. Jones was building a course nearby and Dye wanted his to be different. He achieved this largely by building low profile features and using railroad ties to shore up lagoons and define his bunkers. Significantly, he also built smaller greens that were still heavily contoured.

Despite opening with a sense of spaciousness, the course hasn’t aged as well as some of Dye’s other gems, primarily because the trees protecting homes now intrude farther into the fairways than is ideal. A tale of two parts, the first sixteen holes are narrow and lined by pines, palmettos and giant live oaks while the final two play alongside the marshes of the Calibogue Sound.

Mostly flat and heavily treed, the front nine builds nicely after a couple of relatively soft openers. Its better holes include the 4th, a demanding par three across a sleepered pond, and the short 9th, which features a cool approach for those able to navigate through the pines from the tee and leave themself a clear shot at the tiny kidney-shape green. The rest is narrow and demanding, but the back nine is even more hostile as the later holes are exposed to violent winds off the Sound. Bending left beside a lake, the long 10th is a tough start as its skinny green really needs to be approached from near the water. The 11th is then a super tight two-shotter with a shallow target, while later in the round the 15th is an horrendously over treed par five that demands length and accuracy from the first two shots for a clear view of a microscopic green for the third.

More enjoyable is the par four 13th, designed by Pete’s wife Alice and featuring a fabulous pitch shot across a huge fortified trap. The highlight, however, is undoubtedly the closing stretch, particularly the short 17th, played directly across a tidal marsh toward the ocean, and the gorgeous par four 18th, which also crosses marshland and then follows the shoreline. The hole can be brutal on those unable to hit professional lengths, as the small seaside green is a pretty unforgiving target when approached from distance.

Although some of the longer holes are now too tight for amateur players, most prominent tour stops in the US seem to thrive on being overly difficult and Harbour Town is no exception. The island itself is one of the most enjoyable places to holiday in southern America, and this revered layout remains the best known and, for the majority, the most memorable of all the golf courses in the region. 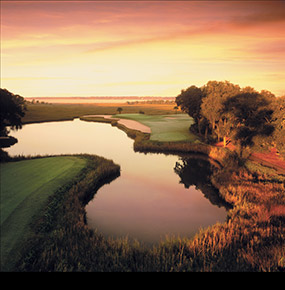 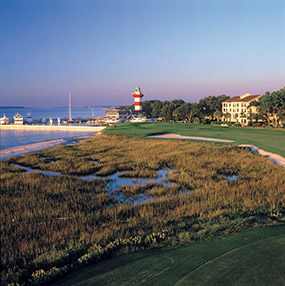