Developed by a couple of business associates, Hawks Ridge is a luxurious golf and residential community built within a 550-acre forest of pine and hardwood in the northern outskirts of Atlanta. Inspired by Augusta National, the course was designed by Bob Cupp, who was only selected as the architect after submitting more than 20 alternate ways to route the layout across the heavily undulating site.

His final routing headed into some of the site’s steeper areas and incorporated a small existing lake as well as a larger man-made body of water. Despite similarities with the vegetation, the course is worlds away from Augusta as the terrain in parts is either too steep for sensible golf or has been totally over-shaped to remove much of the inherent golfing interest. The 18th is the worst example of excessive shaping. From a massive mound the hole horseshoes along the main lake with a long carry needed to reach the fairway but few subsequent options for those unable to blast their second straight into the waterside green.

On the positive side there are a number of attractive holes, including the 2nd, which doglegs along a stream, and the beautiful par three 3rd, which heads across part of a lake. The drivable 6th is also appealing, the hole plunging 75 feet over a creek to a shallow target that will excite and entice the bombers but offer little interest for the rest. The par five 7th will also frustrate the average hitter as a creek cuts the fairway and forces most to layback from the tee. The last half of the hole rises up through tall pines and is quite good, as is the strong, side-hill par four 9th.

Hawks Ridge has managed to squeeze into Golf Digest’s Top 100 and is maintained to an immaculate degree, which helps explain its attraction to certain course raters. For those who believe great grass doesn’t necessarily equal great golf, however, it probably stands out as further validation of their viewpoint. 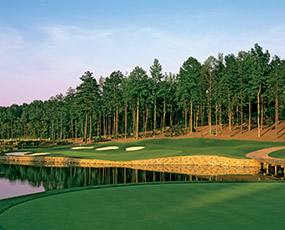 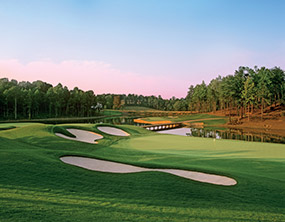