Developed specifically to host championship play, the Hazeltine National Golf Club was founded by Totton Heffelfinger, a former president of the USGA and a member of Minneapolis’s Minikahda Club, which in the 1950s, had become threatened by the development of a local freeway. Heffelfinger sought an alternate site for the club and found what he believed to be an ideal piece of land beside Hazeltine Lake in rural Chaska. When members of Minikahda rejected the move he decided to proceed with plans for a new club of his own.

Heffelfinger’s choice of course architect was Robert Trent Jones, who was in the prime of his career and building the sort of long and demanding layouts that tournament organizers were starting to prefer. Hazeltine opened in 1962 and although it quickly established its tournament credentials, there were serious shortfalls with the layout and Jones was forced to make regular alterations. These changes included the straightening of several doglegs, adding countless back tees, shifting a few green sites and, most notably, the conversion of the 16th from a par three to a famous par four alongside the lake. The green on the par three 8th was shifted to the other side of a pond while the creation of the 16th fairway meant the two-shot 17th had to revert to a par three. In later decades Rees Jones made further adjustments, adding new bunkers and back tees prior to major events in 1991, 2002 and 2006 and, interestingly, restoring some original hazards and landing areas that had become relevant again with the increased length.

Some of these extensions have made parts of the course a little confined, as back tees and greens are often squeezed in close proximity. That said, the current layout is an excellent test of golf, with plenty of length, a good mix of well-bunkered holes and some fine back-to-front angled green sites. The property has gentle undulations, which allowed Jones to build tight, flowing fairways through the trees and, as was his style at the time, to locate several targets on elevated areas.

Not surprisingly, the best part of the course is down by the lake. The approach shot into the 10th green is beautifully framed by the water while the signature 16th is a wonderful spot for a golf hole with the drive crossing part of the hazard to an awkward fairway obscured by trees and reeds. The approach shot then heads into a dangerous green cut into the lake and falling away on all sides. Other solid holes include the left bending opener, long par threes at the 4th and 13th, the nice drive and pitch 5th hole and the strong, uphill par four 9th. The finishing stretch is also good, the 17th is an attractive par three with a tight target while the small green on the newly stretched 18th is tilted steeply forward and does seem a fairly harsh end to the round for those playing from the tips.

Although not quite in the class of White Bear Yacht Club or Interlachen, Hazeltine National is firmly established as Minneapolis’s premier championship venue and is a polished layout with a number of good holes, excellent conditioning and plenty of difficulty. 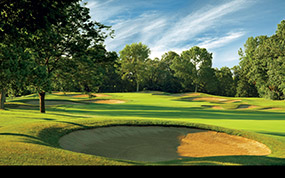