A storied club close to the Jersey shoreline, Hollywood Golf Club was founded in 1898 and moved to its current site in 1917 to a layout that was first designed by Australian-born amateur champion Walter Travis but altered substantially in the years since. The first changes were made by Dick Wilson in the 1950s, one of his holes, the 12th, a freak show with more than 50 bunkers! Rees Jones then changed things up in 1998 during a supposed restoration, adding mounds, back tees and deeper bunkers. There is less Wilson now than before, but also less Travis than it may first appear.

Hollywood’s site is not overly glamourous, it does have a beautiful collection of trees that tend to impede a little in certain areas, but generally the contours are only subtle and the shape of the terrain is moderately interesting. About the only thing that really elevates the course are the few standout Travis greens that remain, like the 9th target which occupies a slight rise and features a cool fallaway valley in its rear that is very difficult to get your ball too when pins are pushed all the way back. The 90 degree dogleg left par four 13th also has a very severe back-to-front green, while cut between a couple of large, bunkered mounds the par three 4th hole is also noteworthy.

The rest of the holes are best described as solid, the routing is decent but could have used some variety between the 5th and 14th stretch, which is full of long holes. The club and membership are from the top shelf, but the golf is now unfortunately middle of the road. 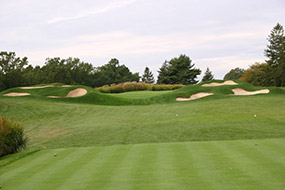 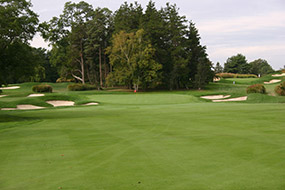 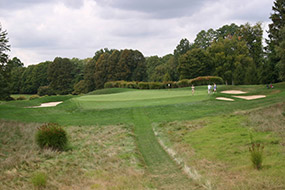