Built within a steep valley, Huntingdon Valley is a 27-hole facility design by William Flynn in 1928 for an established club that moved to its current home when his holes first opened. With a strong female membership, the idea originally was for there to be two championship tests here, nine generic holes used in both routings and nine specifically designed with women and men in mind. The ladies holes start by heading in a loop around the perimeter and are mostly downhill, to help them get roll and distance. Interestingly, during the depression the club closed this loop and they were only rediscovered and rebuilt in 1997, an expanded driving range forcing a couple to be rebuilt elsewhere.

Though well handled, the highlight of Huntingdon Valley is the Flynn nine, the second part of what became the club’s championship test. The opening nine was also routed by Flynn but club professional Joe Kirkwood softened some of his greens, and not as effectively as might have been expected. The 2nd green, for instance, stands out as being unlike all the others while the 3rd green has a Redan look but is flat and doesn’t truly fit the hole. Better are Flynn originals like the severe back-to-front ledge green at the 9th and the falling edges and pockets of the 8th and 15th greens. The close is also terrific, the 16th a steeply left-to-right leaning hole, the 17th a cool par three and the 18th a strong four along a shelf that features a bold second shot up a steep hill toward a steeply angled green that narrows in its rear.

Huntingdon Valley was difficult golf land but Flynn did a good job here and his holes are mostly attractive and well conceived. The course is perhaps best recommended, however, for its naturally healthy and bouncy turf conditions, promoted by a sensible golf committee that understands firm and fast surfaces are essential to good golf. 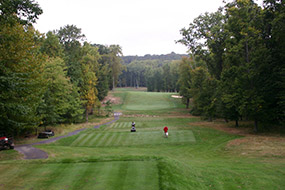 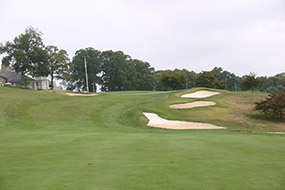 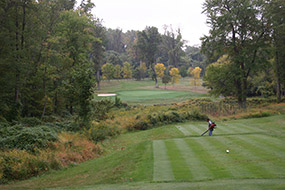