The Inverness Club was formed in 1903, when a number of Toledo’s prominent businessmen financed the purchase of 80 acres of farmland a few miles west of the city. They began by golfing on a nine-hole course, which was later expanded to 18 and then redesigned by the great Donald Ross in 1919.

The Ross course was noted for its sharp green complexes and a compact routing arranged around a series of ridges and through two key ravines that cut across the site. Perhaps owing to the initial confines of the property, Ross built some of his smallest greens here, although they lack none of the creative contouring. The elevated targets are especially nasty, their crowned shapes and falling fronts placing an even greater premium on precise iron play.

Despite its design pedigree, Inverness has been altered continually since completion, first by A.W. Tillinghast, and then by Dick Wilson during the mid-1950s, both men lengthening holes, rebuilding greens and adding bunkers in preparation for major tournaments. The most significant change came in 1976, when George and Tom Fazio were hired to make revisions to the 17th green. The pair felt areas of the course were too cramped and suggested part of the front nine be rerouted to assist spectator circulation for big events. The club agreed and converted three holes into the long par five 8th, removed the short 13th and then added the 3rd, 5th and 6th on adjacent land it owned.

Mercifully, the club recently undertook a major restoration program with designer Andrew Green, who was tasked with returning the tightly routed layout back to something like the original Donald Ross had planned. Gone were the four Fazio holes, which did little to enhance the quality of golf at Inverness, and in their place were two restored par threes and a pair of longer holes that combined original elements with ‘tribute’ features. Green also removed hundreds of overcrowding trees and returned the remaining bunker and green shapes to near their original proportions. The success of the restoration has totally transformed Inverness, and given the property a much more uniformed design style.

Even in its darkest days members here were able to enjoy a number of high-class Ross originals, such as the adjacent 1st and 10th holes, which share a crested ridge and head across a brook into excellent green sites. The 1st green is located atop a ridge while the 10th is set down into the ravine. Rousing long par fours across bold ground contours at the 4th and 7th are also magnificent. Initially played back-to-back they are among the toughest two-shotters Ross ever built.

Routed back and forth across the primary ravine, a five-hole stretch from the 13th is equally impressive. Again the strong fours dominate, the 15th narrowing through a falling valley and then heading toward a small green beyond the creek and the 17th featuring a steeply angled target set into the base of a hill. The heavily bunkered 18th is a famous finisher that is best played with a fairway wood and a wedge, the severity of the traps and the fast, contoured green making par on this mid-length hole more than acceptable.

Among the premier parkland clubs in the Midwest, Inverness and its slippery greens, thick roughs and high-lipped bunkers commands respect from all who play it. Thanks to Green’s successful restoration, the course is once again able to provide enjoyment for its membership, as well as a stiff test for elite players during championship events. 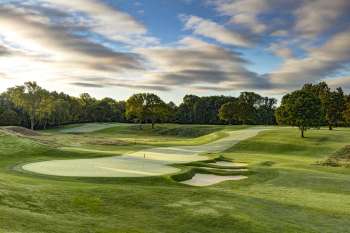 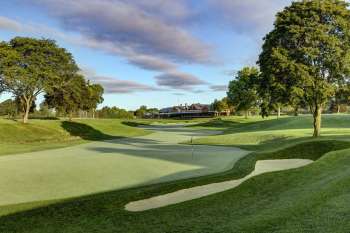