Photo courtesy of the Resort

‘Our design didn’t really have to create new holes as much as take the existing land and natural characteristics and adapt them to make for the most exciting, challenging play possible. Nature gave us a tremendous head start.’ Ben Crenshaw

A luxury resort on the northwest shore of Maui, Kapalua is home to three golf courses-—including Hawaii’s most outstanding, the Plantation, which was designed by Bill Coore and Ben Crenshaw. The layout is built across a former pineapple plantation and set on the seaward side of an elevated mountain slope that leans toward the glistening waters of the Pacific Ocean.

Despite its modern resort setting, Plantation is a throwback to the good old days of golf, where the ground game ruled and holes were designed strategically to provide all standards of golfer with avenues to a good score. Fairways are wide open yet reward bold driving, while the greens are large and perfectly angled to better accept shots from preferred angles. Importantly, the holes were also arranged to accommodate the stiff trade winds that blow off the mountain toward the coast. The strength of these winds can make 660-yard par fives, like the 18th, reachable in two shots while rendering 520-yarders, such as the 9th, genuine three-shot epics.

Routing the course was the designer’s greatest achievement here, as slopes are steep and the property features some sizeable canyons and dense jungle vegetation. The pair apparently started at the end, finding the colossal 18th fairway and arranging the rest of the holes around this area. The variety in terrain and the mix of uphill, downhill and sideslope holes is exceptional. As is the fact that fairways continually bend with the landforms and often follow winds that push you toward the aggressive line, making the gamble even more dangerous but the rewards even greater.

Plantation is most famous for its finishing holes, yet there is plenty of quality throughout the round. The opening hole, for instance, is a fun plunging par four, played first to a wide fairway and then across a gully to an open green leaning to the right. The falling approach into the 4th and downhill, downwind second shot into the 7th are also outstanding, as are the long cross-gully par three 8th and the three-shot 5th, which horseshoes around a huge ravine to an open green site accommodating a chasing fade. The undulating par five 15th and short 11th, played toward Molokai Island and a green angled to accept balls riding the breeze off the right, are other genuine highlights. Despite such quality, the best is undoubtedly saved for last, both the 17th and 18th noted for their massive fairways, awesome ocean outlooks and thrilling downwind approach shots. Reminiscent of the famous 13th at Pine Valley, the huge green on the 17th is perched beyond a deep ravine and sweeps noticeably from right-to-left, while the 18th is a spectacular par five that crashes steeply toward a grand target leaning away to the rear.

With numerous opportunities to ride the wind and bomb your ball long distances, the Plantation Course at Kapalua is not only tremendous fun but also one of the few courses featured in this book that will offer up regular birdie opportunities to all levels of golfer. Given how lush and demanding resort courses are typically set up, it is refreshing to play one kept firm and fast and where you can feasibly make eagles and play without fear of losing a ball. A major enhancement program undertaken here in 2019, involving the renovation of bunkers and the resurfacing of greens with Tif Eagle Bermuda, has aided conditioning, and made Plantation an even more exciting test. 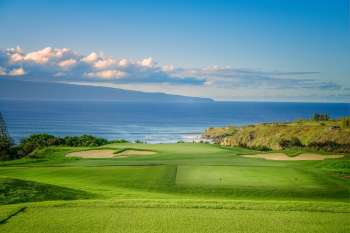 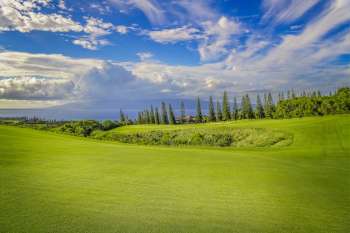 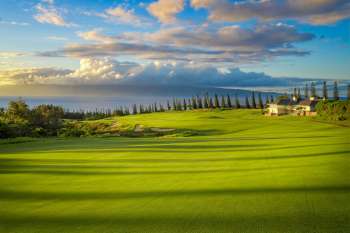