The Kiawah Island Club was established as a private facility for property owners on the increasingly popular South Carolina resort island. The club’s first golf course opened in 1995 and its second, which is actually located just off Kiawah Island, was completed in 2000. Named Cassique, after an Indian chief who once hunted the region, the course occupies agricultural ground alongside the coastal marshes and was designed by Tom Watson, with help from Charlie Arrington.

Built to resemble the links of Great Britain, the course features small pot bunkers and large flowing green sites, but the designers chose to overwhelm Cassique’s relatively soft landscape by adding abundant mounding in an effort to create a more dramatic experience. Unfortunately the shaping is totally unnatural and overdone, but worse most of the holes lack genuine strategic value. The opening stretch is quite decent but problems start at the split-route 4th, where golfers either take the upper fairway followed by a downhill semi-dell par three, or head down the lower road and then play an uphill par three into the alternate 4th green. The next, a klondyke-style par five with its green hidden beyond a bunkered ridge, is slightly better but things quickly deteriorate from here. Aside from a decent approach into the 14th green, the back nine has little to recommend and is punctuated by some awkward architecture on decent coastal land. Holes such as the 15th and 17th touch the tidal marshlands, but each is pinched so tightly that tactical options are extinguished for most players.

With a decent piece of land and an apparently generous budget, the focus on mounding at Cassique seems misguided. The gentle fairway contours also strongly contrast the heavier peripheral shapes, which only makes the actual holes even more disappointing. Aside from the magnificent manor-style clubhouse, there really is little to recommend here. 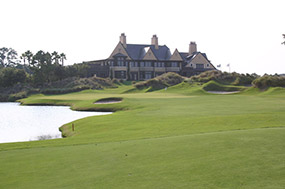 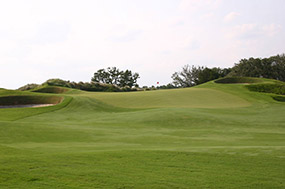 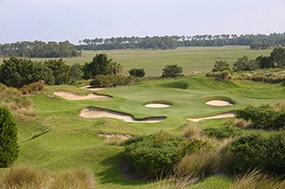 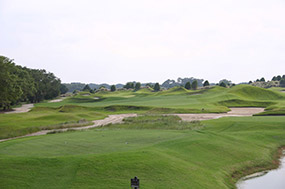