Situated among the tranquil pine-covered hills of central Virginia, the Kinloch Golf Club is an exclusive high-end facility that was developed, in part, by local amateur legend Marvin “Vinny” Giles. The club is located around 20 miles northwest of Richmond on a 270-acre property that had been previously earmarked for a residential subdivision. When the developer decided to build a golf course instead, Giles became a partner in the project and, together with local architect Lester George, helped design the holes.

The layout features two distinct nines built on either side of a 70-acre lake, the front occupying a series of tree-lined ridges and the back set mostly beside the water. Aside from tree and brush clearing, building the course was relatively simple as very little earth was moved and enough natural features existed for good golf. From a design perspective, the holes are well conceived, highly original and attractive to play. The only concern is the continual use of split fairways to challenge better players, at least five holes offering aggressive alternate routes from the tee. These split fairways are much more effective on the par fours, when bold drives are followed by an easier approach or a possible eagle putt, as opposed to a par five like the 9th, where jumping the first hurdle only places a second, even greater, obstacle in your way.

Although far from standouts, the early holes do provide a solid introduction to the course. Both the 2nd and 4th are dual-fairway par fours, the 2nd a well thought out longer hole where the tight drive down the left side leaves a better angle into the green, and the 4th a reachable risk/reward challenge divided by a ditch. More interesting is the mid-length 6th, its approach crossing a nasty ravine toward a target cut into the side of a hill. The longer 8th is also very good, the drive bending around a slight rise and the approach played from a falling lie down to a shallow green positioned diagonally beyond a pond. Ending the nine is a unique par five that heads along a small brook and then across a large ravine, its fairway cut by the first hazard and the green set high beyond the wall of the second. For those seeking birdies, the right fairway is the aggressive line, but this side is awfully tight, and even when found still leaves a frightening uphill shot that needs to be shaped around a tree.

The multiroute holes on the back nine also have their issues, particularly the width of the right fairway on the 11th and the use of a tall tree to block weaker hitters on the short par four 15th. Better are the nicely shaped plateau green on the 12th and the straight lakeside par four finishing hole. The 16th is also very strong, the hole bending around the lake and boasting a dramatic approach shot played across the corner of the hazard and into a tiered green perched spectacularly atop the bluffs.

Beyond good golf, the standard of turf maintenance and the level of service and general club ambience at Kinloch is incredible. A great place to be a member, it’s the memorability and challenge of the holes, together with the overall quality of the entire club amenity, that explain why many regard this as Virginia’s premier golf experience. 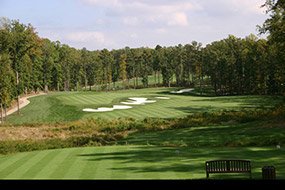 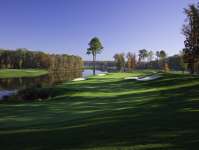 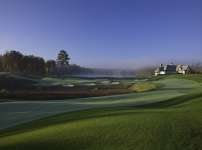