The Long Cove Club on Hilton Head Island was developed in the early 1980s as a resident-only golf club that would be the exclusive domain of homeowners within the 630-acre development. The course was designed by Pete Dye, who built a series of distinctive lowland holes around lagoons, wetlands and through a forest of stately sentinel pines and live oaks.

Unlike at nearby Harbour Town, Long Cove was not created as a championship venue and Dye’s focus throughout was on residential play, rather than the tour caliber golfer. As a result he made his greens more spacious and his fairways wider. He also built natural looking bumps, humps, mounds and moguls within his fairway areas, both to add to the strategic interest of certain holes but also to disguise the flat landscape. Importantly, the shaping is rarely overdone here, the only major exception being the large ridge that Dye built along the side of the 6th, 7th and 8th holes to screen the course from powerlines and a nearby road.

Arranged in two clockwise loops on either side of a central clubhouse, most fairways are cut through homes and trees, though the avenues of play are much less cramped than at some equivalent developments. Built around the same time as the TPC at Sawgrass, the opening hole here is a strong par four that bends around a lake. Unlike the famous 18th at Sawgrass, however, the green is bunkered on the waters side to discourage an aggressive drive close to trouble. Dye built it this way simply to make it different. The next is a pretty par three over a pond while the 3rd is a clever three-shotter that doglegs around water and a large waste bunker. What makes this hole so effective are the believable bumps and undulations that lead toward its nasty diagonal target. By contrast the 5th is the most obviously sculptured hole on the course, and also the most controversial. Less than 320 yards from the back tee, the fairway is set obliquely against a lake with a large mound blocking the view of a sunken green for those unable to tightly hug the water off the tee. Most face the terrifying prospect of playing a blind pitch for their second over the hill and toward a green pressed beside the lake.

The rest of the course is less divisive and, in places, more conventional than golfers may expect from Pete Dye. The most exceptional stretch is through the middle of the back nine, which reaches an open marshland area and overlooks an attractive inlet of the Calibogue Sound. The 13th is an all-carry par three that heads across a swamp toward its peninsula green, the hole followed by a tough par four that bends left around the tidal marsh and punishes those driving away from the hazard with a long, difficult approach shot over all the trouble. The remainder of the holes head back through the trees and are also very strong, particularly the 18th with its huge contoured green sloping steeply to the front.

Long Cove is a surprisingly subtle design full of creative green sites and really fine golf holes. It marks a pleasant break from some of the more torturous resort layouts around the region and is also more playable and enjoyable than some of the beasts that Dye created during this period. 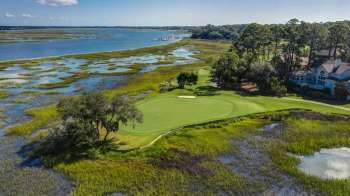 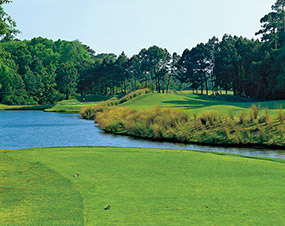 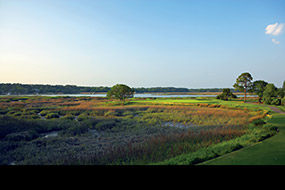